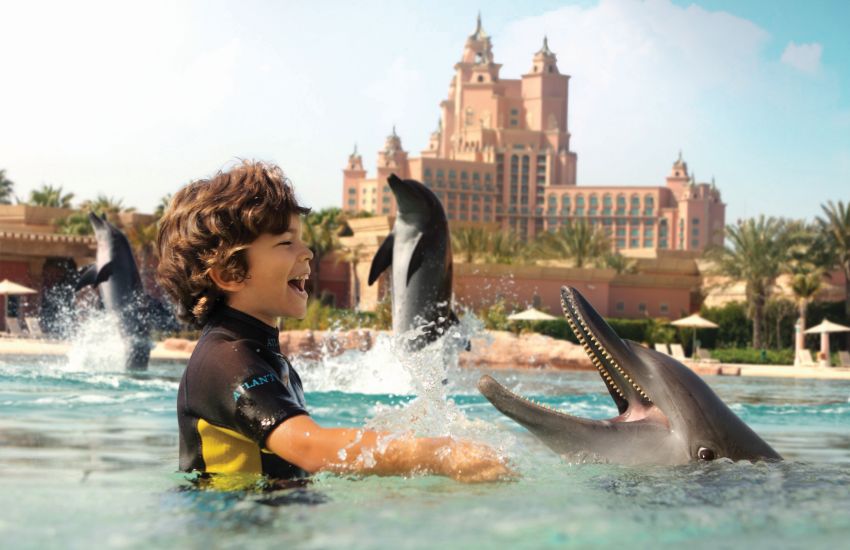 Dubai Dolphinarium is the first indoor air-conditioned dolphinarium in the Middle East. It showcases bottlenose dolphins and fur seals displaying their talent and skills as they dance, juggle, sing, play ball and jump through hoops. Take the unique opportunity to interact with dolphins by kissing, hugging, touching, dancing and playing ball with this fascinating creature.

For a more intimate experience, swim with the dolphins in the knee-deep water. Take a dorsal fin tow or a belly ride under the supervision of expert trainers and learn about the dolphin's behaviors, natural habitats and more.

How to get to Dubai Dolphinarium

Metro: You can take the green line to Dubai Health Care City station

Taxi: You can book any private or public taxi and head directly to Creek Park.

Bus: You can take bus no. C7 directly to Creek Park

The dolphinarium also brings a unique exotic birds show to the Middle East. Be amazed as these beautiful creatures captivate you by their tricks and performance. Marvel at these different species ranging from parrots, cockatoos, green-winged macaws, toucans, and hornbills. Feeling adventurous? Get closer and take the opportunity to feed the birds and spend time with them.

For a challenging experience, step into the only mirror maze in UAE. Try discovering your way out of this baffling and disconcerting life-sized labyrinth maze of mirrors.

A special treat for kids is the 5D and 7D cinemas at the Dubai Dolphinarium. Choose from a wide variety of interactive movies to experience a new level of cinema.

For some more fun, bounce, and jump at the Dubai Dolphinarium’s indoor trampoline designed for all ages.

Fell in love with these lovely creatures? Capture your special moments with them by getting clicked from the professional photographers that can be booked pre or post-show time. Moreover, step into the gift shop and buy souvenirs and mini dolphin and seal soft toys.