Rajasthan: A journey to the maharajas mahal

Royal, Regal, Revered – Rajasthan. A magical universe of colour coded kingdoms. A place where little red turbans and green saris dance to classical music. A place where medieval forts stand tall and proud, amidst flamboyant palaces and jeweled crowns. A place where camels, colour and culture are embodied as one. A mystical desert that has seen many wars, heard many secrets and narrated many stories.

Highlights of Rajasthan Tourism: Through the looking glass

Experiencing Rajasthan to the fullest, requires an understanding of its vibrant history. What tells a story better, then the objects of its past? We recommend the following museums for your day of history lessons. Standing the test of time is the oldest museum in Rajasthan, and the official state museum - Albert Hall Museum. Don’t miss out on the opportunity to marvel at the exquisite ivory statues and crystal work. Ahar Museum, on the other hand, will give you a glimpse into one of the finest collections of earthen pottery. Place this high on your list of things to do in Rajasthan. Anokhi Museum of Hand Painting is a beautifully restored haveli in the heart of Amber that showcases the age-old tradition of block printing. 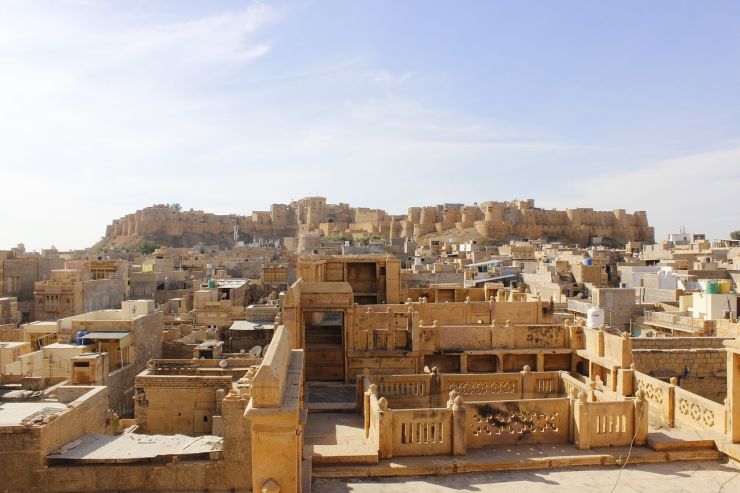 The land of Kings is synonymous with its towering forts and opulent palaces, each commemorating an event, person or object. While embarking on your Rajasthan tour, you should definitely go see some of these architectural wonders. Chittorgarh Fort with its palaces, towers, gateways and reservoirs is akin to an English castle - filled with tales of magic and heroism. Kumbhalgarh Fort, on the other hand (second largest wall in the world), represents defensive architecture at it’s finest. Carved out of marble and sandstone, Amber Fort is a world heritage site that paints its surroundings with hues of pink and yellow.

Take a secular voyage of the royal state, by visiting some of its most revered holy places. Rajasthan sightseeing is incomplete without a little spiritual cleansing. Begin with Akshardham Temple in Jaipur, which is celebrated for its immense beauty and tranquility, surrounded by sparkling fountains and an abundance of greenery. It is dedicated to Lord Narayan, whose statue is adorned with gold and silver embellishments. Head to Bagore Sahib, which is a sacred gurudwara that marks Shri Guru Govind Singh Ji’s journey to Punjab. Abdulla Pir Dargah in Banswara is a sacred place for Bohra muslims and a stunning site to behold, as it glistens in white.

Rajasthan is like an intricately woven carpet. Each coloured thread represents a unique cultural element that blends together harmoniously to create something beautiful. From the traditional attire (ghagra and kanchli), to the folk music (Maand, Panihari) and dance (Ghoomar and Kalbeliya), to the sweet and sumptuous Rajasthani food (bajre ki roti), each facet of the local culture will entice more than one sense.

Beginning at the mystical sand dunes in Jaisalmer, to the balmy banks of Pushkar lake, to the majestic Mehrangarh fort in Jodhpur, Rajasthani festivals redefine the meaning of pomp and splendor. Imagine camping under the desert stars, whilst exotic belly dancing, turban tying, and moustache competitions occur in the backdrop of the Desert Festival? If you’re an artsy person, the International Folk Festival in Jodhpur celebrates the coming together of diverse art forms from over 200 artists. Pushkar Camel Fair hosts 5 days of Camel races, beauty contests, puppet shows, music and dance performances. 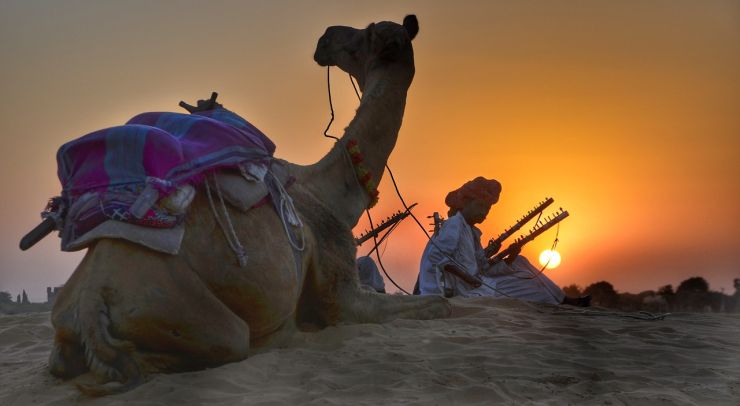 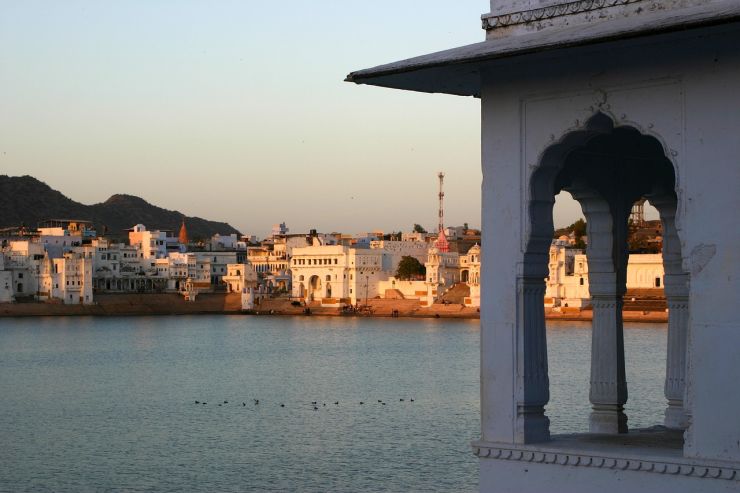 From the prowling tiger to the largest flying bird – the great Indian bustard, to the graceful camel, Rajasthan is home to a plethora of wild animals, some of them endangered species. Rajasthan sightseeing has earned its reputation in being a nature lover’s haven. Among the many reserve.

Rajasthan lies in the northwestern region of the Indian continent, taking up majority of the Thar desert, and sharing its border with Pakistan’s provinces of Punjab. Surrounded by 5 Indian states – Punjab, Haryana and Uttar Pradesh, Madhya Pradesh and Gujarat, Rajasthan is cocooned with unique culture from all sides.

Rajasthan’s seasons vary significantly, falling under the categories of summer, monsoon, post monsoon and eventually winter. With each season comes the promise of something new. Like all deserts, Rajasthan is sweltering in the summers. The temperatures can go up to a scorching 48 degrees. As such, the best time to visit Rajasthan is during October to March. This period will experience a significant drop in temperature, followed by the icy winds of the winter.

How to get to Rajasthan

By Road – Rajasthan has an intricate network of state and national highways, that covers an area of approximately 6373 km. Whether you avail of the bus service which has been operating for 49 years, or you opt for a car/taxi, the beautiful landscapes will greet you with enthusiasm and make for a scenic drive.

By Rail – Rajasthan has a collective 4600 km of rail tracks spread evenly throughout the state, rendering it well connected to the rest of the country. It has direct trains to and from Mumbai, Delhi, Bangalore, Chennai, Hyderabad and Kolkata. Opting to take the train will prove to be a wise decision.

By Flight –Udaipur, Jaisalmer and Jodhpur are well connected to other parts of the country by air. For international flights, Jaipur is not the only option. Delhi is just a mere 260 km away from Jaipur, making it a viable option when travelling to and from overseas locations.

According to archaeologists, Rajasthan has borne life for several centuries. Traces of ancient civilisation began with the settlement of the Harappans - of the Indus valley. Quick to follow were powerful dynasties such as that of the Aryans, the Mauryan dynasty, Gupta Dynasty and the Gurjara-Pratiharas. By the medieval period, Rajasthan moved from the hands of the Rajput’s, to the Chauhan’s and ultimately power resided with the Mughals. It was later in the 18th century, after the Maratha empire relinquished its control to the British East India Company, that the independent state of Rajasthan was formed. James Tod, a former employee of the company, was enthralled by the grandeur and majesty of the place. He thus coined the name Rajasthan, which means the "Land of kings".

As a child, almost all of us have dreamt of staying in a royal palace. Sitting on the cliff of the fort, dressed in regal clothes while we sip our favourite drink and enjoy the splendid view from there. Sounds magnificent, does it not? With all the colourful curtains, pillows, queen sized beds, marvellous mirrors, and massive gates that guard the forts against the enemies, palaces have always been a dream! Rajasthan, the jewel in the crown of India, can make your fairy-tale come true. Often referred to as the Land of Kings, Rajasthan is one of the treasures of India.

With royal forts, gorgeous palaces, rich wildlife, and vibrant festivals, this state celebrates the true spirit of India and showcases one among the finest cultures of this country. It is an exquisite destination for all the tourists who are fed-up with the conventional spots. Rajasthan has no beaches; it is all about the desert and the sands. With the most colourful bazaars in India, to the royal palaces; Rajasthan is a celebration of traditions and festivals. The forts here have been revamped and made into glorious restaurants for you to stay and live your dream. During the time of festivals and events, the entire state transforms into an explosion of colors, making it more beautiful than usual. Be it the National Parks, Forts, or Monuments; Rajasthan will not dishearten you. Due to the rise of tourists coming to Rajasthan, it has been getting better day-by-day, allowing more people from across the world to visit the place and celebrate the true spirit of Rajasthan!

Tucked between the Thar Desert and the Aravalli Range, Rajasthan is the largest state of Republic India. The state of Rajasthan has 33 districts distributed within seven divisions namely Jaipur, Jodhpur, Ajmer, Udaipur, Bikaner, Kota, and Bharatpur. Jodhpur is the most significant town in the Thar Desert and is known as the gateway of the desert. Other than Jodhpur; Jaisalmer, Bikaner, Barmer, and Nagour are other principal towns in the Thar Desert. Jaipur is the capital of the state, which is also the most popular destination for the tourists. Besides Jaipur; Ajmer, Udaipur, Chittorgarh, Kota, Bundi, and Jaisalmer are some of the places of interest among the tourists in Rajasthan.

The Indus Valley Civilisation and the Vedic Civilisation are to be appreciated for the beauty Rajasthan has turned into today. After the civilizations, Maharana Pratap rose to power in the kingdom. Succeeding Maharana Pratap are the Rajputs followed by the Mughals. However, modern Rajasthan is all about Rajputana consisting of two chiefships, 19 princely states, and Ajmer-Merwara, which is a British district. The Marwaris played a very important role in the development of the region economically.

Being the largest state of India, Rajasthan has a population of more than 68.89 million. Jaipur is the most populated town in Rajasthan with more than 3 million people living in it, followed by Jodhpur, Kota, Bikaner, Ajmer, and Udaipur.

Marwari is the official language of Rajasthan. However, Hindi is spoken by more than 90% of the population making it one of the important languages of Rajasthan. Other than Hindi; Urdu, Punjabi, and Bhili are spoken by some people in the state.

Currency
Indian Rupee (INR) is the official currency of Rajasthan.

Rajasthan is a quite affordable place to visit when compared to other destinations in India. Here, you can stay in a decent hotel for around INR 3000-4000 approximately per night and get your meals for less than INR 1000-1500 approximately. The taxis will cost you around INR 1000-1500 per day, depending on the distance you travel. So, all in all, around INR 10000-12000 would be sufficient for you to have an enjoyable trip to Rajasthan. Thanks to Rajasthan Tourism, ATMs are available at every corner in the popular cities. There are also many restaurants that accept credit cards, making it much easy for you. However, when you visit any tourist attractions, make sure you have some cash along with you to avoid any troubles. Tourism in Rajasthan has become comfortable these days, because of the constant efforts of the Rajasthan Tourism Department, to make the place more tourist-friendly. Not only Indians but foreigners from across the world are coming to visit Rajasthan and admire its beauty. There are Rajasthan Tourism Guides available at all the famous locations including the airports and railway stations, to make your trip more comfortable.

Places To Visit in Rajasthan

How To Reach Rajasthan

Famous Places to visit in Rajasthan

Exploring Rajasthan with Thomas Cook was everything I expected. Their assistance helped in planning the best route around Jaipur – Jodhpur- Jaisalmer – Udaipur and Pushkar. This was made even better because our guide Lakshmi was really good at her job. Even our driver, Susheel the driver and he knew the best and shortest routes to reach everywhere before time.

It was an awesome trip. I really dont know if there could be a better team to handle our trip than Thomas Cook. They made our Honeymoon experience royal and exquisite. With one night booking in the Taj Palace Udaipur itself, we were more than satisfied with their assistance and professionalism.

I am generally a do-it-yourself travel planner but the one time I gave this duty to Thomas Cook to manage a trip for 20 people from my office, it became just too good. The hotel and Udaipur and Mount Abu were too good. The view from the top was something that really fascinated me. Apart from this, the day trips to Kumbhalgarh fort and Ranakpur was handled extremely professionally.

My holidays were not good...they were the BEST ! Thanks to the Team of Thomas Cook