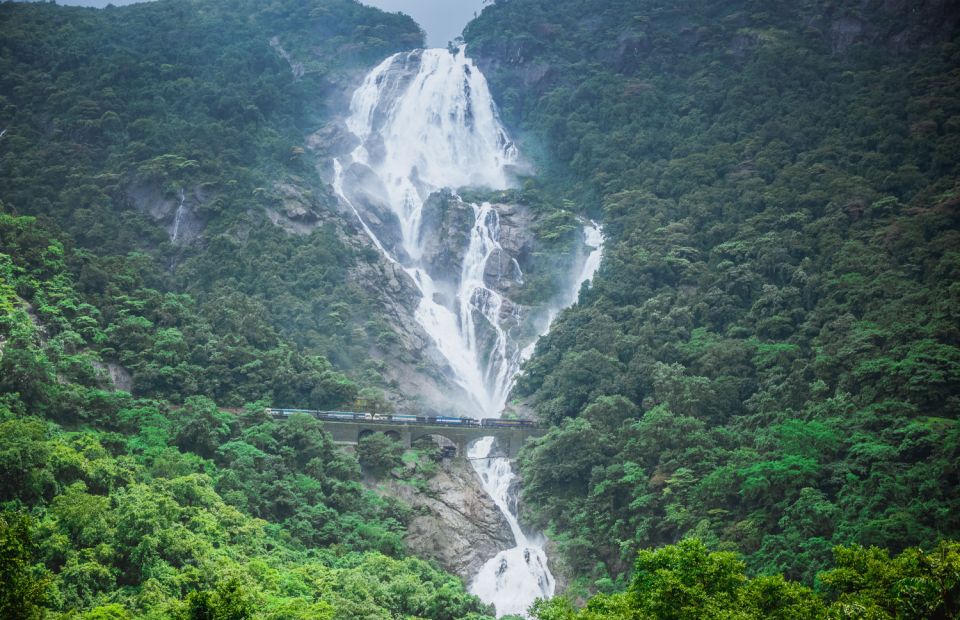 Nestled between Goa and Karnataka border is the majestic Dudhsagar Waterfalls, which when literally translated means ‘sea of milk’ in Konkan.  Located in Sanguem Taluka, near Bhagwan Mahaveer Wildlife Sanctuary, Mollem, the waterfall originates from Karnataka flowing from the Deccan Plateau into the river Mandovi towards the imposing Sahyadri Western Ghats cascading from a height of 300 meters and splitting into three streams, forming a deep green pool with clouds of milky foam rising up at the base before continuing its journey to join the Arabian Sea in the west. The magnificent waterfall is an enchanting spectacle to behold as it vehemently gushes down appearing as a heavy stream of milk flowing effortlessly from a distance.

Perched at the top of a crescent shaped valley and surrounded by lush pristine verdant forest with a rich biodiversity, Dudhsagar Waterfalls offers an unparalleled, magical and mesmerizing view that attracts a large number of local and foreign tourists.

The appearance of the waterfall as milky has a legend associated with it. Apparently there was a wealthy king who ruled the western ghats and had an opulent palace with a vast landscape of a flourishing garden and abundance of animals roaming freely there. His daughter was a beautiful princess who used to bathe in the lake close to the palace and drink sweetened milk from a golden jug ritually post bathing. One day as a prince was passing by the river he noticed the princess. Embarrassed at being watched in her inadequate bathing attire, she poured the jug of milk in front of her to shield herself, thus forming a curtain of milky water to cover herself. Hence, from that day onwards the waterfall has had a milky appearance.

To reach the Dudhsagar Waterfalls, one has to hire a jeep which carries 6 passengers only from tour operators run by the government of Goa’s forest department that will include a driver cum guide tour from Mollem to the base of the Dushsagar Waterfalls. The bumpy rocky ride will take you through the hilly topography of the scenic dense riveting tropical forest where you can also spot monkeys in abundance and small creeks to the parking base from where it’s a 10km trek a stream of water to the captivating sights of the charming waterfall where you can swim along with the fishes or dip your feet in the pool and relax. Every visitor is provided a lifejacket which is mandatory to wear when visiting the Dudhsagar waterfalls.

As you pass through the sanctuary, which is a residence to a diverse range of bird species and a bird watchers paradise, you can witness paradise fly catcher, grey jungle fowl, kingfishers, great Indian hornbill, fairy blue bird, drongo etc. Some of the animals found around here are langur, spotted deer, barking deer, wild boar, flying squirrel, civet etc.

The best time to visit is during October to May as the jeep safari stops operating during the monsoon season. During monsoons the waterfall swells up due to the heavy rainfall and the pool deepens making it unsafe to swim in. Goa can be reached conveniently from any part of the country and is well connected by air, rail and road network.

How to get to Dudhsagar waterfalls

Air: The nearest airport is Dabolim Airport, Goa. From there you can hire a cab to Dudhsagar Waterfalls

Train: The nearest station at a distance of 6km is Collem station. From there, you can either hire a taxi or take a bus.