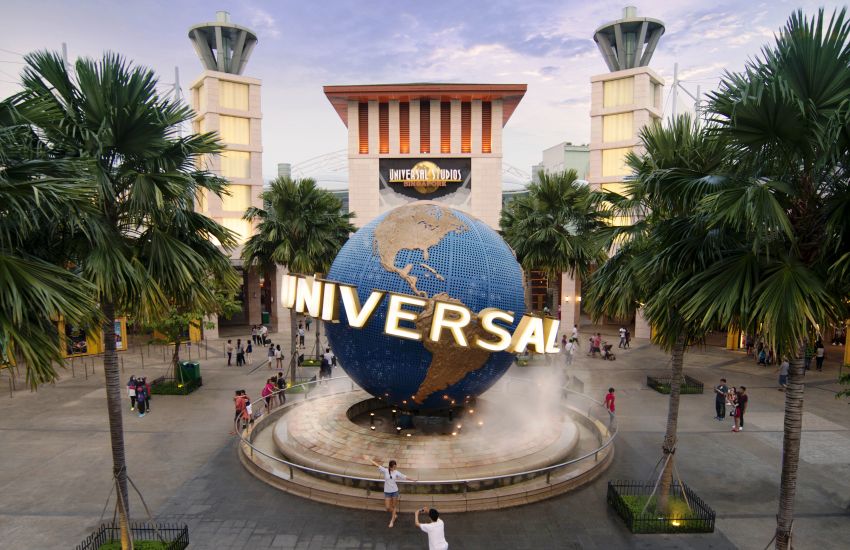 Recognised worldwide, Universal Studios in Singapore is lighting a fire of entertainment in the hearts of adventure seekers and fun lovers alike. Located within Resorts World Sentosa, it is the first ever Hollywood movie-themed park in Southeast Asia. The park is divided into seven movie-themed zones and each of them is uniquely designed. It features 24 rides and attractions that promise thrill, lots of laughter and lasting memories.

Fit for every age-group, Universal Studio is our top recommendation.

Hollywood zone will acquaint you with the glamorous world of Hollywood where you will come across gorgeous art nouveau buildings of 1940s.
The streets are lined up with a plethora of unique shops and restaurants.

The Star Attractions in Hollywood

Lake Hollywood Spectacular: Spectacular fireworks glaze the sky with bright lights. Good and uplifting music score is played throughout the firework show. Definitely not to miss out on.

Hollywood Walk of Fame: From the glamorous Marilyn Monroe to Audrey Hepburn, a meet and greet session with the most famous superstars along the Hollywood boulevard will leave you star struck. Click a few pictures with Sesame, Minions and may more Universal movie stars.

Hollywood China Bistro: One of the most famous eateries in the theme park. Enjoy lip-smacking Chinese food amidst a warm ambiance.

Universal Studio Store:  You can buy any article associated with Universal Studios all under one roof. This huge store is a dream come true for the fans and a must-visit.

This zone takes you back in the classic New York of 1940s with cobbled-stoned streets and faux gas lamps. Here you step on to a movie-set that replicates the Big Apple.

The Star Attractions in New York

Lights Camera Action!: A Steven Spielberg masterpiece, it is a show that follows a story of Hurricane hitting New York. It has the right flavours like every Universal Studio movie.

Sesame street spaghetti space chase:  A thrilling ride that is surely not to miss out on for the adrenaline rush. Sesame Street characters and special effects complete this ride.

Big Bird’s Emporium: A store that has all the sesame street characters related products on sale.

Loui’s NY Pizza Parlor: This is your destination if you crave the classic NY style pizza. Pick the best of authentic Italian pizzas that are served in variations.

At the Universal Studios in Singapore you can explore the fabulous world of Sci-fi City, a perfect place for science fiction lovers. This is where you will experience next generation 4D motion-base thrill ride – The Transformers.

The Star Attractions in Sci-Fi City

Battlestar Galactica - Human or Cyclone: This is the tallest dueling roller coasters in the world at 42.5 m height. It is designed for optimum adrenaline rush with its diversions and loops. This is biggest challenge of all the 24 attractions and certainly not for the faint-hearted.

Transformers - The Ride:  A 4-D ride that takes you through all the dark, spooky loops and whirls. Apart from the 4-D effects, several other special effects like fog, water, warm air and many more are used to give a full-fledged end to the fun ride.

Accelerators:  A ride that can be equally enjoyed by the adults, senior citizens as well as the kids. Keeping up with the tradition of loops and turns, Accelerator is not as scary.

After spinning on the exhilarating rides of Sci-fi world, step into the world of ancient Egypt. It’s a haven for archaeology lovers and Egyptologists. Explore the buried treasures of The Mummy and hog on the spicy Mediterranean and Malay cuisine at Oasis Spice Café.

The Star Attraction of Ancient Egypt

Revenge of the Mummy Roller Coaster Ride:  Inspired by The Mummy movie franchise, this ride includes all the elements of the movie. From dim lighting effect to variations in track, it is a complete adventure ride.

Now step into The Lost World to go further back in time for prehistoric adventures.  The rides and activities are majorly based on the two most popular movies ever – Jurassic Park and Waterworld. It features a lot of dining and shopping options too.

The star attraction of The Lost World

The Jurassic Park River Rapids: The ride is based on the concept of the Jurassic Park and will drift, rush, and plummet you through the river rapids. Riders start at a structure similar to the one seen in the Jurassic Park River Adventure. The ride starts swiftly and then suddenly flash floods hits and that’s when things go terribly thrilling. The rides pass through various jungles and terrains surpassing different dinosaurs along the way. This water-based Jurassic Park ride is full of entertainment packed with plenty of tension and scares.

Amber Rock Climb – a vertical wall studded with Dinosaurs skeletons, suitable for novice and expert climbers. There is a pint-sized wall for kids too.

While Dino-soaring will let you ride your own dinosaur and controls its vertical movement, the flying Canopy will let you fly high and offer a bird’s eye view of “The Lost World”.

Water world packs the action extravaganza, especially for the die-hard stunt fans. The aerial acrobatics, explosions, boat and Jet Ski stunts will get your jaws dropped in amusement.

From The Lost World to the world of fairy tales, Far Far Away will take you to the whimsical world of Shrek. It will bring the magical home of Princess Fiona with its towering castle and cobbled-stone streets to life.

The Star Attractions of Far Far Away

Puss in Boots Giant Journey: A theme-based roller coaster ride that takes you on a journey with Puss in Boots, an iconic Universal character. Search for the eggs with the mighty cat, and save the orphanage.

Fairy Godmothers potion shop and juice bar: Two different stores that sell magical juices and magic words written on exotic articles. This is the closest you could ever be with the magical world of Shrek.

Donkey Live: A show that allows the crowd to intimately interact with the digital puppet. This is a hit amongst the younger crowds.

Shrek 4-D adventure: The typical story of Shrek on a journey to find Princess Fiona wins hearts every time. This is a 3-D show with added effects to enhance the overall experience.

Madagascar is a mega blockbuster that depicts stories of animals who escaped zoo and go on an adventure to find their true habitat. Indulge and relive the exotic jungle life in the ‘Madagascar zone’.

The Star Attractions in Madagascar

Madagascar - A Crate of Adventure: Listen to the voices of David Schwimmer, Ben Stiller, Chris Rock and Jada Pinkett Smith while you go on a river boat journey. What make this a star attraction IS the sound effects and extremely complex technological advancements that make the experience as real as possible.

King Julien’s Beach party-go-round: This is a very simple merry go round ride that involves all the Madagascar characters.

Gloria’s snack shack: A Japanese food serving eatery, Gloria’s shack is hosted by Gloria the hippo (a character in Madagascar).

How to get to Universal Studios?

Universal Studios is situated in Sentosa Island. It is really easy to reach this destination, as it is well connected to all the transportation facilities available in Singapore.

MRT (Mass Rapid Transit): MRT is the cheapest way to get to Universal Studios. From Bugis MRT Station, take the train to Outram Park MRT Station, alight and transfer train to Harbour Front MRT Station. From Harbour Front you can choose to take bus at the bus interchange or monrail at vivo city level 3 into USS.

Shuttle: If you are a tourist, make sure you show your passport while boarding the bus that will directlt take you to universal studios. The theme park provides this service for free for all the tourists.

Taxi: Getting a cab is the easiest way to reach Universal Studio. It will cost you 10 to 15 SGD.

Universal Studios is usually open from 10 AM-7 PM, 7 days a week. Exceptions occur during festivals or emergencies.