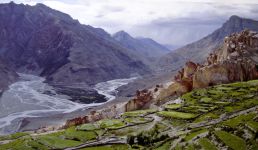 Visited heavily by tourists in Kullu, the Spiti Valley is one of the famous place of Himachal Pradesh. Spiti Valley is a cold desert mountain valley located 412 km away from Shimla. There are many places to visit in Spiti Valley. Few of these are Komic Village, Langza Village, Lhalung Monastery, Tabo Caves, Tabo Monastery. Tabo Monastery is one of the oldest monasteries in the world and a favourite of the Dalai Lama. Spiti is second home to many Gaddi sheep and goat herders (nomadic tribe of Himachal) who come to this valley in summer for grazing their animals from the surrounding villages.

Bargaining: Street shopping at its best, you

Spiti Valley is an exquisite cold mountain desert in the lap of the Great Himalaya Ranges in Himachal Pradesh. Spiti literally means the middle land; and is aptly named, as Spiti Valley separates India from Tibet.

Situated at an altitude of 12,500 feet above sea level, the picturesque valley encased by the Himalayas is an exotic destination and gem of Himachal Pradesh. Snow crest alps, snow carpeted pristine landscape, alpine forest, deep ravines speckled with greenery, glistening glaciers, sparkling azure rivers, splendid monasteries and quaint hamlets embellish the valley and exude a vision of a mesmerizing painting. The surreal beauty of the valley and the monasteries allures tourists and trekkers from all over the world.

Key monastery also known as ‘Kye Gompa’ is a beautiful Tibetan monastery perched at an altitude of 4,112 meters above sea level in the Kaza region. Overlooking the Spiti river, it is the most famous and largest monastery in Spiti Valley with a resplendent Lord Buddha shrine and a treasure trove of ancient Buddhist literature, manuscripts, thangkas and murals. The fort like structure of the monastery bears resemblance to Chinese theme and comprises of a striking assembly hall and fascinating Tengyur room which is richly adorned with exquisite murals and paintings. The monastery also serves as a religious center where the lamas receive their education and training. Witness an astounding dance of the Lamas, accompanied with musical instruments such as pipes and horns.

Located at a height of 4,300 meters, Chandra Tal Lake is the most strikingly beautiful lake in Spiti Valley and the name derives from it’s crescent shape. 6km from Kunzum pass, the lake is a paradise on earth with shimmering crystal blue waters swathed with vast lush green meadows and snow crested alps. The lake is a spectacular vision in the morning when the brilliant rays radiating from the sun bathes the lake in various hues of red, orange to blue and green while at night the pristine waters reflect a still black hue and is a breathtaking unparalleled sight to behold.  Chandra Tal lake is popular with trekkers and campers for its mystic beauty, thrilling trails and the brilliant night sky making it a gorgeous destination for camping.

The Tabo monastery is the oldest and ancient monastery in India. Built in the 10th century, it is perched on an elevated altitude of 10,000 feet above sea level in the cold desert of Tabo. Referred to as the ‘Ajanta of the Himalayas’ as the walls are adorned with mesmeric murals depicting the ancient tales of the Mahayana Buddhist Pantheon and ancient paintings just like in the Ajanta caves, it is a beautiful monastery comprising of 9 temples such as ‘The Temple of the Enlightened Gods’, ‘The Buddha Maitreya’ etc. and multiple stupas. The temple houses various beautiful stuccos of Boddhisattvas, artistic murals, exquisite frescoes, and beautiful paintings along with a priceless collection of manuscripts and works of Buddha and Thangkas. Being one of the most historically significant sites in the Buddhist culture, the Archeological Survey of India has taken over the responsibility of its maintenance and preservation.

A picture perfect lake, Suraj Tal is a dream painting come alive especially for photographers. Literally translated as ‘Sun Lake’, Suraj Tal is a spectacular lake, located below Baralacha pass and is most frequented spot by nature lovers, photographers and trekkers. The lake is fed by the Baralacha glaciers surrounded by trails ideal for trekking and mountain biking.

Located at 4,590 meters above sea level, Kunzum pass is a gateway from kullu and Lahaul to Spiti Valley. The drive on the rugged terrains offers a stunning panoramic view of the Chandra Bhaga range, Spiti Valley and Bara Shigri glacier. Trekkers can trek to the pass from Chandra Tal lake. One can also seek blessings at the Kunzum Devi temple by taking a complete circle of the temple in your car. It is believed to protect travelers from any mishaps that may occur on such rough roads. The colourful Buddhist flags swaying in the wind add to the beauty of the place.

Located at a great height of 16,040 feet above the sea level, Baralacha Pass is a challenging pass situated on the Manali-Leh highway in the Zanskar ranges. The 8km long pass connects Lahaul to Ladakh and offers trekking, mountain biking and camping opportunities with magnificent views of the mighty snow clad Pir Panjal, Great Himalayas and Zanskar ranges, glorious glaciers and the Bhaga river which originates from Suraj Tal Lake. Embark on an exhilarating adventurous trek and camping to Baralacha Pass from Chandra Tal lake which takes a week to complete.

Set amidst frozen streams is a beautiful Pin Valley National Park situated in the cold desert bio reserve of Spiti Valley. Situated at a height of 3,300 meters, it is home to rare and endangered diverse species of flora and fauna. One can encounter wildlife such as Siberian ibex, Himalayan snow leopard, snowcocks, Tibetan gazelle, wooly hare, chukar partridge amongst others. 22 rare medicinal plants have been discovered here apart from the cedar and deodar trees populating the park. Adventure seekers can also trek to the park through scenic beauty and regal backdrop of snow capped alps.

The best time to visit Spiti Valley is in the summers between May to October as it is cut off from the rest of the world in winters due to heavy snowfalls and thick icing conditions.

A relaxing and rejuvenating escape into the hills to seek peace and experience a serene culture embraced by the monasteries and tranquil nature.

How to get to Spiti Valley

The nearest airport is Kullu Airport at Bhuntar, Kullu located at a distance of 245 km. A cab can be hired from there directly to Spiti Valley.

The closest major station is Shimla railway station. A cab can be hired from there directly to Spiti Valley

Several private and state buses ply from major cities to Spiti Valley. Private car and taxi can also be hired.

can bargain to your heart’s content in Akhara bazaar.