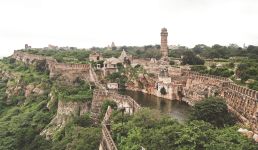 The illustrious fort of Chittorgarh is not only the pride of Chittorgarh and India but is also declared as a UNESCO World Heritage Site in 2013. Chittorgarh fort is a rare gem and attracts tourists from all over the world who get spellbound by this great infrastructure.  Many people call it Chittor Fort and amongst other forts, this is the largest. Situated in the town of Chittor, Chittorgarh fort is the capital of Mewar. Perched over a hill, the fort is spread across an area of 280 ha. The main reason the fort garners a lot of tourist attention is because it is also home to historical palaces, gates, temples and two commemorative towers. The sizable fort has many compelling stories and was also the source of inspiration for the 2018 blockbuster movie ‘Padmaavat’. Rajasthan has more history than the entire country put together – it is the realm of erstwhile Maharajas and their lavish palaces and majestic forts.

The intense history of Chittorgarh fort will definitely set the pulse racing for many tourists. According to legends, the fort was built by Chitrangada Maurya and is located 175 kilometers to the east of Udaipur. The fort signifies the courage and sacrifice of the Rajput. However, there are other stories revolving around the fort, one says that Bhima, one of the Pandavas, with all his accumulated strength hit the ground and from it a huge reservoir came into being. The water body created by Bhima is called Bhimlat Kund. The Chittorgarh Fort also popularly known as Water Fort and is home to 22 water bodies, palaces, towers and temples spread over 700 acres.

The fort was captured numerous times; the first one to lay his hands on the fort was Bappa Rawal of the Guhila dynasty, who defeated the Moris to capture the majestic fort. Another historical story suggests that the fort was under the Arabs and they were defeated by Bappa Rawal. The third story concludes that Bappa Rawal received the fort as dowry by the Moris after he got married to one of the princesses from their kingdom. The fort also witnessed the most epic battle in Indian history of Alauddin Khilji and King Ratnasimha that lasted for almost eight months. The Delhi Sultanate ruler Alauddin Khilji was brutal in his intent and massacred 30,000 Hindus after capturing the fort. He was smitten by the ravishing beauty Princess Padmini, who was married to King Ratnasimha. This evil motive of his led to the self-immolation (jauhar) of Queen Padmini, who refused to give in to his demands. His ego was shattered after he witnessed the sacrifice of Queen Padmini along with other women, however after his death; the fort was passed on to his son Khizr Khan.

The Rajputs were dominant in their endeavour to capture the fort and ultimately succeeded after Khizr Khan had no option but to surrender to Sonigra chief Maldeva. For a duration of seven years, the fort was under his control, but Hammir Singh of the Mewar Dynasty intervened and captured the fort. The Mewar Dynasty cherished every bit of ruling the fort and built an indomitable military under the reign of Rana Kumbha. But Rana Kumbha couldn’t sustain for long as his own son killed him to take control of it. After the crumbling of the Mewar Dynasty, Bahadur Shah rose to fame and captured the fort in 1535.

The year 1567 saw the rise of Emperor Akbar who wanted to take control of the whole India and became obsessed to capture the Chittorgarh Fort. Once his intention was set on conquering the fort, there was no looking back. Emperor Akbar defeated Rana Uday Singh II of the Mewar Dynasty in a battle that continued several months.

Perched atop a high hill of 180 meters and sprawling at 700 acres, it is a 13km long riveting sight to behold. A long road leads to the seven gates of the fort namely Ganesh gate, Hanuman gate, Padan gate, Jodla gate, Bhairon gate, Lakshman gate and the last and the main gate, Ram gate. The gates were built to protect it from attackers and invaders.

The tower was built by Maharana Kumbha as a mark of victory against Mohammed Khilji. Located at Chittorgarh Fort, this monumental structure has sculptures of Hindu deities. Tourists, who are fond of captivating sights, should head to the terrace balconies where they can get a riveting view of the full town. One can also capture images of Jain Goddess Padmavati. Also present at the site is the carved word ‘Allah’ in Arabic nine times.

To glorify the Jains, Kirti Stambh was built by Jain merchant Jeeja Bhagerwala. This structure is devoted to Adinathji, the first Jain Teerthankar and has figures of the Digambars.

Situated on the western side of the fort, Gaumukh Reservoir carries a holy significance. The reservoir is filled with the help of a cow’s mouth shaped structure from where water flows. According to many stories, devotees, who visit many shrines, should certainly visit Gaumukh Kund to complete their holy journey.

This palace is known for its brilliant architecture and history, and is named after the Sisodia Dynasty. Tourists will be enthralled to know that this is the same palace, where Queen Padmini amongst other women plunged into the pyre. It was also home to famous poet Meerabai.

The mesmerizing palace is as beautiful as Queen Padmini was. It is the same palace in which Queen Padmini along with King Ratan Singh lived. Also, Alauddin Khilji’s obsession for Queen Padmini began from here that lead to a war between him and Ratan Singh.

The Meera Temple is dedicated to Meera Bai, and was built by Maharana Kumbha in 1449. Tourists seeking some peace of mind, should visit this beautiful temple, where Lord Vishnu is worshipped. The stunning temples is reminiscent of the Indo-Aryan architecture. The outside of the temple has a carved statue of 5 human structures, with just one head, signifying that people from all religion, culture and communities live in harmony.

Built in the 14th century, the Kalika Mata Temple devoted to Goddess Kali has a magnificent architecture and fascinating art

Fateh Prakash Palace is a modern style palace which was built by Maharana Fateh Singh. Located in the Chittorgarh Fort, the palace is now transformed into a government museum, and has a wide range of beautiful sculptures, ancient weapons such as daggers, knives, axes, helmets, shields and uniform of soldiers. This spectacular museum is also home to a Ganesh idol, a fountain and frescos.

At Mohan Magri, Satbis Deori is a beautiful temple, where Jains come for worship. The fort of Chittorgarh has 6 Jain temples with beautiful intricate carvings. Amongst the many temples, Bhagwan Adinatha with 52 devkulikas is the largest.

The Chittorgarh Fort is a place for everyone, but it will definitely be a special treat for those consumed by history, art and culture.

How to Reach Chittorgarh Fort

Once tourists arrive at the Dabok Airport, they will be flown to Chittorgarh, which lies at a distance of just 90 kms.  Travelling by flight will save you a lot of time.

If tourists are thinking of taking the train, then the rail network is well connected to numerous cities like Kota, Udaipur, Jaipur, Ajmer and Delhi. Another convenient and comfortable way of travelling, is boarding the Palace on Wheels, which too is connected to Chittorgarh station.