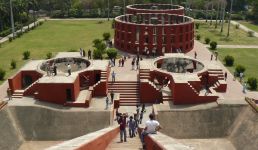 Jantar Mantar is an astronomical observatory built in the 18th century by Maharaja Sawai Jai Singh II in the regal city of Rajasthan, Jaipur. Declared as a World Heritage Site by UNESCO, it comprises of 19 colossal instruments built of stone and marble. Literally meaning ‘Calculating Instrument’, the purpose of the observatory was to study time and space.

The first observatory was built in Delhi in 1724 and when Maharaja Sawai Jai Singh II made Jaipur his capital, he built the largest and most accurate observatory there in 1734 and is the best preserved observatory till date. Maharaja Sawai Jai Singh II was a brilliant scholar and was commissioned by Emperor Muhammad Shah to make corrections in the astronomical tables and to confirm the data already available on the planetary positions. Jai Singh’s observation that the zij used to predict the position of the heavenly bodies did not match the positions calculated on the table. Hence, the main purport of the observatory was to refine the ancient Islamic zij tables to determine the exact hour of the day and define the calendar accurately for the benefit of the society and individual. In the quest for accuracy, he built five observatories in five cities New Delhi, Jaipur, Ujjain, Varanasi and Mathura to compare readings from different coordinates. The one observatory in Mathura was destroyed and ceases to exist.

The architectural marvel and instrumental innovations and placements allowed the observer to note the celestial body positions with naked eyes. The instruments pertain to Egypt's Ptolemaic positional astronomy tradition which was shared by many civilizations to apply the cosmological vision based upon astronomical facts to astrological positions. There are instruments working in each of the three main classical coordinate systems: the horizon-zenith local system, the equatorial system and the ecliptic system.

Situated in 18,700 square meters of area, Jantar Mantar is the most advanced observatory with 19 instruments with some of the largest built of it’s kind.  The instruments are capable of measuring time, predicting eclipses, track the location of stars as the earth orbits around the sun, establishing the declinations of planets and defining the celestial altitudes and related ephemerides. Some instruments could be used for both daytime and nighttime observations. Maharaja Sawai Jai Singh II decided to build the observatory instruments with stone and marble because stone can withstand extreme weather conditions and has a longer life compared to metal which wear and tear easily. Though, there are some instruments that are built from bronze. The observatory had around 20 permanent astronomers and was very active during the life of Maharaja Sawai Jai Singh II. Rajasthan has more history than the entire country put together – it is the realm of erstwhile Maharajas and their lavish palaces and majestic forts.

Some of the interesting instruments at the observatory are:

1.Samrat Yantra -  The largest instrument, the Vrihat Samrat yantra is a sundial that can give the local time to an accuracy of 2 seconds. It is the largest sundial ever built with a gnomon arm 22.6-meter high and largest quadrants of radius 15.5 meter. The shadow of the triangular wall, which is placed in the north-south direction with an angle equal to the latitude of this location moves equal distances in equal time intervals, on the eastern and western side quadrants. This movement is calibrated to read the local time.

2.Small Samrat Yantra - The small samrat yantra is a sundial that can give the time to an accuracy of 20 seconds. The shadow of the triangular wall of the yantra, falling on the eastern & western side quadrants, tells the local time.

3.Kapala Yantra -  Kapal Yantra is able to record the co-ordinates of celestial bodies in both the azimuth-altitude and equatorial systems, and permits a direct visual transformation of the co-ordinates of any point in the sky between the two systems.

4.Rasivalaya - Rasivalaya are instruments for measuring the latitude and longitude of the celestial bodies. There are twelve instruments which represent the twelve signs of the zodiac, each becoming operative when a different one of the 12 zodiacal constellations straddles the meridian.

5.Unnatamsa - It is an instrument for measuring altitude or the angular height of an object in the sky. The large brass circle that hangs from the supporting beam is the measuring instrument of the Unnatamsa. The brass circle is pivoted to rotate freely around a vertical axis. A sighting tube is pivoted at the centre of the circle. It can be moved in the vertical direction to align it towards any celestial object.

6.Jaya Prakash Yantra – A highly innovative sundial, it is a representation of half celestial sphere rim which represents horizon for finding all the positions of the heavenly bodies. Its striped black and white appearance gives it an interesting appeal that makes it very popular amongst tourist.

How to get to Jaipur

Flight: The nearest airport is Jaipur International Airport, Jaipur. A cab can be hired from there directly to Jantar Mantar

Train: The closest station is Jaipur station. A cab can be hired from there directly to Jantar Mantar

Road: Several private and state buses run to Jaipur. Private car and taxi can also be hired to reach the place.