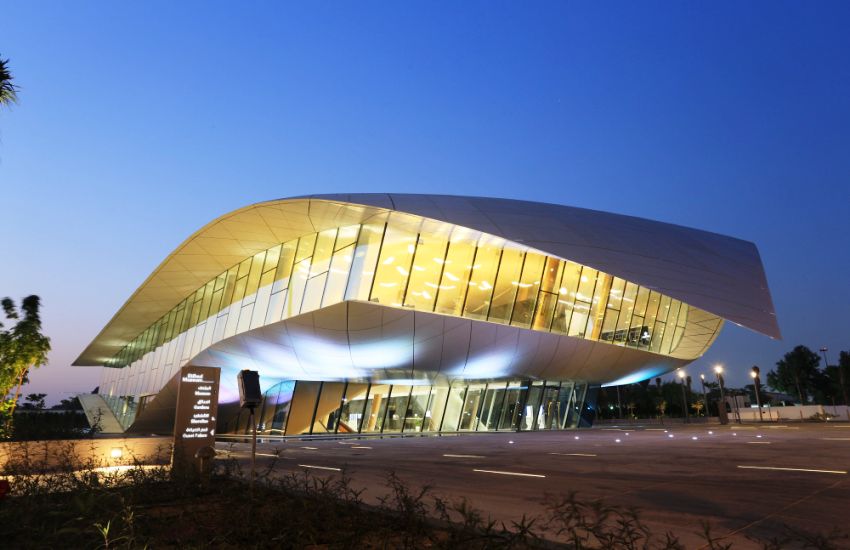 A contemporary 21st-century museum, it chronicles the founding and history of Emirates through photos, documentaries, personal artifacts and interactive pavilions. Located adjacent to the historic Union House, it is the exact place where the founding fathers of the seven emirates got together and signed the declaration forming the United Arab Emirates (UAE).

Spread over 25,000sq. meter the beautiful architecture is inspired by and reminiscent of the constitution manuscript. The parabolic roof represents the parchment upon which the constitution was written and the golden seven columns in the entrance hall symbolizing the pens used to sign the agreement. An expansive white marbled plaza links the building with the Union House and the recreated guest house where the rulers stayed during the negotiations.

How to get to Etihad Museum

Metro: The nearest station is the ADCB Metro Station (red line – M1 and a taxi from there to Etihad Museum.

Bus: The following buses can be taken based on departing location: 28, X13, C1 and 8

Taxi: You can book any private or public taxi and head directly to Etihad Museum

Car: Parking facilities are provided if traveling by car.

The museum includes permanent and temporary halls, a theatre, an educational area, a recreational area and is divided into eight pavilions. The visitors get a glimpse of the UAE’s rich heritage and life before the treaty exploring the events from 1968 to the culmination of the unification of Emirates in 1971 through 1974.

The halls each have a different theme dedicated to the Founding Fathers, where visitors will get a chance to know each of them through their photos, personal quotes adorning the walls, personal artefacts such as old passports, rings, eyeglasses and pocket watches, stamps and letters and other rare items are on display and interactive screens that provide information about their biography and family trees.

Pavilion One: Showcases a documentary film about the history of the UAE.

Pavilion Two: Houses a panoramic interactive map highlighting the era before the formation of the federation.

Pavilion Three: An interactive timeline that demonstrates key historical events before the union.

Pavilion Five: An interactive guide to the formation of the union.

Pavilion Six: An homage to the important moments and challenges confronted the founding fathers before 1971.

Pavilion Seven: This will be dedicated to the UAE Constitution and will include the actual declaration itself.

Pavilion Eight: The final pavilion will be an open gallery celebrating the newborn nation.

The interactive timeline section takes one on the journey into the past displaying the story and significant films.

Another section of the exhibition is the Dubai interactive map which showcases a panoramic view of the region before the unification.

The canals section exposes the steps leading to the foundation of the Union through a series of pictures and exhibitions in the shape of an irrigation canal.

The museum library houses more than 3,000 historical, political and social books, a variety of magazines, CDs and other items related to the UAE.