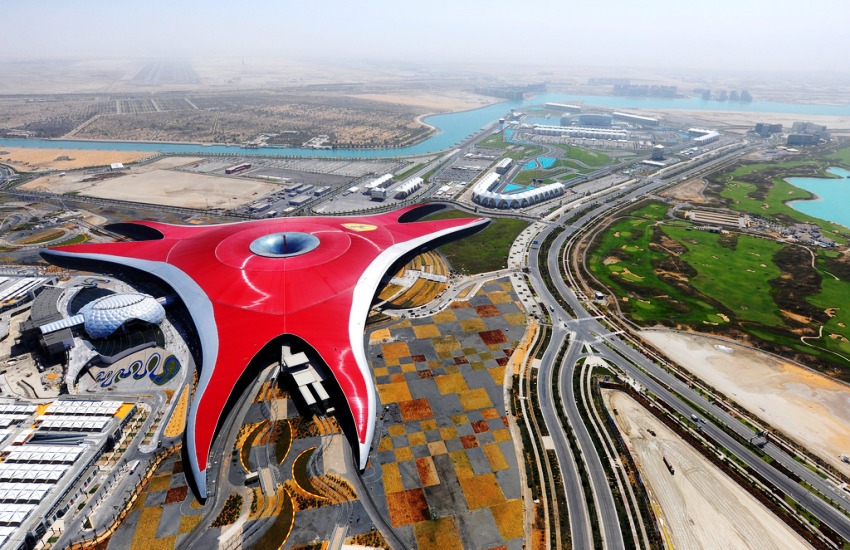 Ferrari World Abu Dhabi is the first amusement park dedicated to the luxury sports car brand - Ferrari and a fantasy come true for every race aficionado. The park has around 20 enthralling rides and various attractions that capture the essence of Ferrari. The construction of the park began in November 2007 and was inaugurated 3 years later in November 2010 in a grand opening ceremony with a spectacular show attended by His Highness Sheikh Mohammed bin Zayed Al Nahyan, Abu Dhabi Crown Prince, and the Deputy Supreme Commander of the UAE Armed Forces. Also present were F1 drivers Fernando Alonso and Felipe Massa.

Admission free for children under 3 years of age

How to get to Ferrari World and Yas Waterworld

Taxi: You can hire any public or private taxi service to Ferrari World

About Ferrari World and Yas Waterworld

Ferrari World Abu Dhabi has a wide range of rides to thrill and excite kids, adults, and families with an appetite for G-Force and velocity. Be it rollercoasters, go-karting, state-of-the-art simulator or rides dedicated to children, there is guaranteed action-packed excitement for everyone. Some of the top-lining attractions are:

Formula Rossa—Strap in, put your goggles on and prepare to be blasted 240km/h in 4.9 seconds on the world’s fastest rollercoaster. After scaling heart-racing heights of 52 meters and with the adrenalin rush of 4.8Gs riding high, you’ll cross the finish feeling like a true Scuderia Ferrari champion.

Flying Aces – world’s tallest non-inverting loop and inspired by the legendary ‘ace of aces’ aviator, Count Francesco Baracca, Flying Aces is a rollercoaster like no other. Board your military bi-plane and scale 63 meters at a spectacular 51-degree incline. Feel your pulse race as you fly through the world’s highest rollercoaster loop and hit speeds of up to 120km/h.

Driving Experience – Live the dream and drive around Yas Island in a Ferrari. You’ll receive instructions on how to drive the car from a trained instructor. With space in the back seat for up to two passengers, it’s the perfect adventure to share with family or friends.

Driving with the Champion - F1™ & GT virtual simulation. Climb aboard this cinematic motion-based simulator and become a trainee engineer alongside a virtual F1™ pro. Experience the thrill of mastering the corners of the Fiorano track and hit the streets of Maranello at lightning speeds.

Fiorano GT Challenge - Release your competitive streak and race friends on twisting parallel tracks in a Ferrari F430 Spider. The circuit is based on real GT racecourses, so brace yourself for furious hairpin turns and exhilarating straights as you reach speeds of up to 95km/h.

Scuderia Challenge – a state-of-the-art simulator. Take the wheel and try to top the best lap times as you race a variety of Ferraris on the virtual Yas Marina Circuit pushing your F1™ potential to the max

Benno's Great Race – a family interactive dark ride as you help Benno win the race in the world of interactive challenges and special effects.

A special thrilling entertainment for kids is the Junior Grand Prix wherein after watching an educational film, they will get behind the wheels to drive a Ferrari F1™ racer as per instructions received from experts. A dream come true and rare opportunity for every Ferrari fan as they hone their skills and race along the challenging tracks.

Factory tour -  a privilege previously reserved only for Ferrari owners. Discover how a Ferrari GT is made by gaining an insight into the entire manufacturing process – from the early designing stages, engineering, painting and final hand assembling to testing it on Ferrari’s Fiorano circuit.

Gallery – Get amazed by the unique collection of Ferrari models as you stroll the gallery and learn interesting facts about them.

Cinema Maranello – A beautiful film about how Enzo Ferrari came about making his dream come true in 1920 and created a superior luxurious brand.

After an exhilarating time at Ferrari World, cool yourself at Yas Waterworld, the largest and award-winning waterpark in the Middle East. Based on a theme of ‘A Lost Pearl’, it is the story of a young girl named Dana who embarks on a journey to retrieve a lost pearl that used to bring prosperity to her village and how during her journey she encounters supportive animals and bandits with the story ending in her tear dropping into an oasis which brings to rise the majestic pearl. Spanning across 37 acres of land, it is home to more than 40 captivating rides based on the theme and segregated into 4 zones: Adrenaline Rush, Exciting Adventures, Moving & Grooving and Young Fun catering to a diverse age range of kids to adults. The most popular rides are:

Bandit Bomber: Ranked amongst the world’s biggest and thrilling roller coaster of 2013, by CNN, it is Middle East’s longest suspended roller coaster at 550m with spectacular laser effects

Jebel Drop: Enjoy the panoramic view of the park from the top before zipping down the steepest waterslide

Hamlools Humps: Feel the thrill of being airborne as you hit the three massive humps of this speed slide

Liwa Loop: Experience the first high-intensity looping waterslide in the Middle East wherein the floor opens from beneath the feet and into a closed tube

Bubbles Barrel: For every adrenaline junkie, this double hump speed slide with 3m high waves and thousands of litres of swirling water is the world’s largest surfing sheet wave.

Dive into the depths of an underwater tank to collect oysters containing precious pearls and learn how to open the oysters and the nature and colour of the pearl which is your’s to take as a memento of this unique pearl diving experience only at Yas Waterworld.

After the end of an enthralling day, relax in the private cabanas for 4-6 guests featuring a VIP service and exclusive menu.