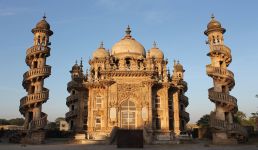 Junagadh is situated at the foot of Girnar Hills and is the seventh largest city in Gujarat. It is one of the most architecturally forward and charismatic cities of Gujarat owing to the different rulers who reigned over it over the years. The literal translation of Junagadh is “old city” and derives its name from Uparkot, an ancient fort built in the fourth century. Junagadh is also known as ‘Sorath”, the name of the princely state that existed before the partition of India and Pakistan in the year 1947. Junagadh is a pot boiler of various cultures and is overflowing with ancient art and history. Apart from the famous Girnar Hill and Jama Masjid, one can see beautiful inscriptions, caves, temples, forts, step wells, edicts, tanks and canons dating back to 2nd century AD that will blow your mind away and enrich you about different cultures and religions and what it is to have all of them infused together as one.

The name Junagadh means Old Fort and has had numerous famous rulers over the years like the Kshatrapas, Mauryans, Chudasamas, Guptas, Vilabhis, Gujarat Sultans and Babi Nawabs. The fascinating history of this city in Gujarat chronologically presents the birth and genesis of what once used to be a strong foothold of the different rulers. Delving into the history reveals that it has been a religious as well as a cultural hub in many ways.

All the different rulers who ruled over the state of Gujarat have left a mark on its religious past. Jainism, Hinduism, Buddhism and Islam are the different religions that are majorly practiced in Junagadh. The old rock that are called Buddhist caves are as old as 500 BC. Beautiful stone carvings and floral work can be spotted in these caves. Just like Buddhism, it is of great religious importance to Hindus as well as Jains. On top of Mount Girnar there are different temples which are extremely auspicious to Hindus and Jains. The top can be reached by climbing 9999 steps constructed along the temples.

The tomb of Nawabs from the Babi Dynasty which are famously known as maqbaras are situated adjacent to the railway station. The beautiful Mahabat Maqabra was built over the tomb of the 6th Nawab Sahib Muhammad Mahabat Khan shortly after his death. The Bahar Ud Din Bhar Maqabra is widely known for its grandeur and beautiful intricate carvings. Built in the 1800’s, the architecture is an evolution with a blend of Hindu, Muslim and European art which is definitely worth a visit if you are interested in architecture and love photography.

The Darbar Hall Museum was earlier a hall which was used by Nawabs to host events and their formal audiences. However, now it has been converted into a museum, displaying textiles and weapons. One also gets to see royal furniture, classic chandeliers and glass mirror carved in wooden framings.

Sakkarbaug Zoo was built in the year 1863 and is thus one of the oldest zoos in India. It is home to Asiatic lions that were once present all over Asia but are now becoming extinct. A very small population is now present at the Gir National Park. They even opened a natural history Museum in the year 2003 for people to get a better insight on the habitat of these wild animals who are on the verge of extinction.

These caves date back to 500 BC and have been carved out of the Uparkot Hill. The main hall is abundant with rich decorations, art and culture.

Jama Masjid is a mosque and a historic symbol of Junagadh built in the year 1423 by the Ahmedabad’s’ founder Ahmed Shah I. The mosque has an open courtyard made with white marble and the walls made with yellow sandstones. The mosque has a whopping 15 domes and 260 pillars to support the structure with intricate detailing and designing.

Mount Girnar is the highest point of Gujarat. This green mountain is full of teak forests and has Hindu and Jain temples scattered all over the range thus making it crucial from religious point of view. There are ten thousand steps to be climbed to reach the top and takes around 5 to 6 hours to reach the top. People also undertake treks to the top to see the breath taking view from atop.

A religious city, it has several magnificent temples dedicated to different deities. The most famous ones are the Gorknath Temple, Dattatreya Temple, Kamandulu Kund and Kalika Mata Shikhar.

Uperkot Fort was built in the year 319 and rebuilt a number of times however was never restored. This is the reason that today this fort is in a bad shape but a lot of things that can be learnt by visiting it. The Buddhist caves, Jama Masjid, Adi Kadi Vav are all placed together inside the Uperkot Fort.

The weather in Junagadh can be accounted to the conditions in the region overall and is thus characterized by extreme climates. It is very hot in the summers and equally cold in winters.

The heritage of Junagadh forms the basic premise for its existence. Over and above this, there is also great wildlife to be explored. This city is apt to be explored by animal lovers and architectural admirers. Junagadh also has religious importance and is often visited by Hindus, Muslims, Jains and Buddhists alike.

How to get thereBy Road

Junagadh is extremely accessible by car and buses. Hoping on a bus is the best way to reach Junagadh. Good road connectivity and State Transportation is available from Ahmedabad, Rajkot, Porbandar, Veraval and Porbandar.

A number of express trains run through Junagadh and it is very well connected to all major cities of India.

Junagadh does not have an airport; the nearest airport is the Porbandar Airport. Porbandar to Junagadh is approx. 100 kilometers by road and can be reached by road or rail.

Junagadh is located in the State of Gujarat, India. It is situated 355kms south west of the state capital Gandhinagar.