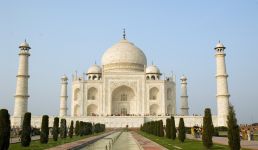 Red Fort: This was the military establishment built in the 16th century. Red Fort over the time faced many changes and was converted into a large palace.
Taj Mahal: Taj Mahal is one of the most popular monuments in Agra. No tourist ever leaves Agra without visiting the Taj Mahal. The architecture and beauty of the monument will make you amaze and give a memorable experience.
Fatehpur Sikri: Constructed by Mughal emperor, Akbar, this was his capital. This wonderful attraction is visited by millions of local and international tourists throughout the year.
Sikandra: This is the place where the Great Mughal Emperor Akbar was laid to rest. This monument has a great importance in the history of Mughal Empire.
Baby Taj: This is a small tomb situated near the Yamuna River in Agra. This is one of the famous monuments in Agra that was built in 1620s.
Diwan-I-Khas: Also known as Hall of Private Audience, this structure was built beautifully with marble. Its inlay work and carvings are incredible. You can find wonderful floral designs on the columns.
Anguri Bagh: Situated in front of Khas Mahal, this structure was established by Akbar. The monument has a great history. Soil for constructing this monument was said to be brought from Kashmir.
Musamman Burj Red Fort: This is a huge tower in Agra where Shah Jahan was kept as a captive by his son Aurangzeb, however, this tower was built by Shah Jahan for his loving queen Mumtaz, who was buried in Taj Mahal.
have us call you back!
enquire now
call us
Also See . . .
Places To Visit in
agra
Best Time To Visit in
agra
How To Reach
agra
agra
Photos & Videos