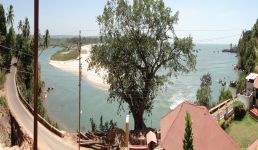 With some time in hand, travellers can explore the various places that are around Goa. Karwar, located at a distance of 15 kilometres south of Goa-Karnataka border, can be reached within 1 hour 45 minutes from Goa. It is a sea-side town between the Western Ghats and Arabian Sea. Abundant in bio-diversity, this place has Sadashivgad Fort, KarwarBeach, KurumgadIsland, Oyster Rock Lighthouse, etc as prominent attractions.

The beautiful hill resort of Amboli can also be visited from Dabolim, Goa. The place abounds in immense natural beauty with other attractions as well. Some noteworthy attractions include Hiranyakeshi Temple, Nagatta Falls, MahadevGad Fort relics, Shirgaonkar, Purvicha Vas, etc.

Situated on the Konkan Coast lies Vengrula, in the Sindhudurg District of Maharashtra. The place is known for its hills, which surrounds the city on all directions, the various temples dedicated to different Indian gods and goddesses, the serene and pristine beaches and last but not least the extensive plantations of mango, coconut, berry and cashew-nut trees.