Viennese Taste Enjoying Food And Drink To The Fullest In Vienna 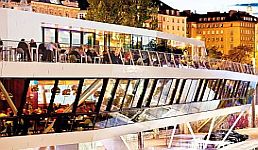 Viennese cuisine is the only type of cooking in the world that is named after a city. Vienna is also the only metropolis in the world that grows enough wine within city limits to be worth mentioning. The Viennese coffee house is known around the globe for its informal pleasantness, as an oasis of gemutlichkeit. No wonder that the bistro, wine tavern and cafe are the foundational pillars of Vienna’s culture of food pleasures in all its enticing variety.

The Viennese like things simple and pleasant. So Viennese bistros are nice and comfortable. As long as we can remember, these restaurants have been serving up solid, tasty home cooking from schnitzels to goulash, liver with herbs in butter to Kaiserschmarren, a kind of shredded pancakes. This consistency has led to a renaissance of the bistro culture that has recently been celebrated in familiar restaurants such as the Ubl, Gasthaus Wolf and Glacis Beisl as well as the renowned Wirten am Eck'.

The enjoyment of a good drop of wine crafted from the 700 hectares of Viennese vineyards is not limited to these places. The most exclusive local restaurants have long featured Viennese Riesling and Pinot Blanc (Weissburgunder). And the Wiener Gemischter Satz. This specialty, which was even awarded the DAC seal of quality recently, involves growing the grapes of at least three different white wine varieties and pressing them together. Especially the guests at the heurige enjoy young and old Viennese wines along with the hearty delicacies from the buffet. These romantic and cozy taverns can be found by the dozen in the wine villages at the edge of the city such as Grinzing and Nussdorf.

The Viennese coffee house has been an oasis of gemutlichkeit for ages. And since 2011, the traditional Viennese coffee house has even belonged to the intangible cultural heritage of UNESCO. Traditional cafes such as the Central, Landtmann, Museum and Demel entice with a wide variety of coffee drinks, international newspapers and pastry creations. Modern representatives of the genre, such as the "Drechsler", "Balthasar" and "Supersense", enhance the tradition with stylish flair. A close relative of the cafe is the pastry shop. Their specialty, pies and cakes, are the icing on Vienna's dolce vita in the form of Bundt cake and sachertorte. Chocolatiers such as "Xocolat", "Fruth" and "Bluhendes Konfekt" also offer sweet temptation. In Vienna too, gourmet temples are at one end of the pleasure scale – such as the Silvio Nickol Gourmet Restaurant, the restaurant of Konstantin Filippou or Steirereck im Stadtpark, which ranks 14th in the "World's 50 Best". And at the other end, you can find... fast food! However, with a special Viennese twist: A trip to the wurst stand, especially after visiting the ball, and sometimes after a concert or the opera, is quite the custom.

The city serves up a cornucopia of different taste experiences, from hearty to organic and ethnic. Offerings that are often ideally combined with a surprising ambience: No matter whether you're dining with a view in "Das Loft" restaurant in the Jean Novel Tower on the Danube Canal or having a drink in the "American Bar" once furnished by the architecture innovator Adolf Loos: the show and taste experience go hand in hand.

You’ll find epicurean delights in every corner of the city on the Danube. Nevertheless, some quarters are especially tempting to gourmets by offering an enormous variety in a small area. Such is the case with the Naschmarkt. This highly fascinating Viennese market serves up exotic offerings from around the world and boasts of a number of must-visit gastronomical establishments in the market and surrounding streets, from the ON Market to the Amacord. Trendy pubs, such as "Wetter" and "An-Do" entice at the Brunnen and Yppen markets, while round the corner at the Karmeliter market, the "Marktlucke" and "Pizza Mari" have been the topic of conversation for quite a while. Other culinary spots worth experiencing are the dining districts on the Spittelberg, in the Servitenviertel, around Margaretenplatz and in the Freihausviertel . A host of culinary events – from the Genussfestival in the Stadtpark to the Vienna Wine Hiking Day to the Snail Festival and special restaurant weeks – add further gustatory pleasures to the mix of delicacies.