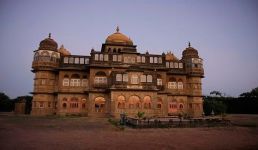 Vijay Vilas Palace is one of the best palaces in India with a slight touch of modern architecture. Built only 100 years ago in 1920, it is safe to call it a contemporary palace, especially when comparing it to the amazing centuries-old forts and palaces that India has. The fact that Vijay Vilas Palace is just a hundred years old is great because the palace is in the same shape it was a century ago. There has been no loss of any beauty that the artisans from Gujarat, Rajasthan, Bengal and Kutch showcased in this palace.

Located in Mandvi in Gujarat, it was built during the reign of Maharao Shri Khengarji III as a summer resort for his son and heir. Built with red sandstone, the sea-facing palace is simply breath-taking.

Vijay Vilas Palace, located in Mandvi, took 9 years to build and is one of the finest examples of Rajput architecture in Gujarat. The complete structure is laced with tiny lattices and windows which aid in the natural airflow in the palace. The jharokas, chatris, chajjas, murals, and paintings are all reminiscent of the Rajput architecture. The palace has its own private beach with air-conditioned accommodation in the form of tents.

How to get to Vijay Vilas Palace:

There are many airports that are close to this palace such as Bhuj, Rudra Mata and so on. However, you will have to get a connecting flight from a major airport to reach here.

By train : the nearest major railway stations are that of Bhuj and Dwarka. Even though they are at a distance of more than 50 kms from Mandvi, they are the most appropriate for travel as they have the highest frequency of trains. You will have to travel via cab or bus once you reach the station.

By road : it is just 8 kms from the Mandvi Bus Stand and is easily accessible by road.

The best time to visit the palace is during the winter season when the temperature is not soaring high. Since it is so close to beach, the humidity can be too much to bear during summers and rainy season.

The Vijay Vilas Palace is open to tourists from 9 AM to 1 PM & 3PM to 6PM. The beach resorts and accommodations are open throughout the day though.

The ticket price for visiting the palace is just Rupees 10 and with an additional charge of Rupees 50 for photography.

One of the finest examples of Rajput and Indo-Saracenic architecture, Vijay Vilas Palace is surely a must-visit place in Gujarat. Get in touch with Thomas Cook to get the best deals for accommodations at this palace.