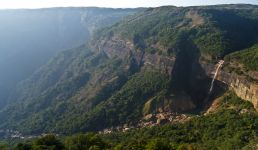 Cherrapunji is a town nestled high on the plateau of East Khasi Hills of Meghalaya and is famous for being one of the wettest places on earth due to the high amount of rainfall it receives in a year. The pristine tranquil beauty of the valley speckled with numerous grand and spectacular waterfalls, mysterious caves, lush verdant unadulterated landscape and refreshing cool temperature and ambience makes it a popular tourist destination for locals and foreigners. The town has many mesmerizing spots that attract nature lovers:

Seven Sisters Waterfalls – Known as the Nohsngithiang Falls or the Mawsmai Waterfalls, it is a seven segmented waterfall and fourth highest in India at the height of 1,035 feet. Plunging from the limestone cliffs, it derives its name from the way it spreads into seven streams flowing down like a dazzling vision especially when the radiance of the sun illuminates it vibrantly forming a colourful illusion of a rainbow. It is a major attraction that draws tourists, especially during monsoons.

Living Root Bridge - Cherrapunji’s living root bridges are an exemplary work of nature and human. The root bridges created by the local people of Khasi who have a specialized training is essentially tangles of massive thick roots, which have been intermingled to form a bridge that can hold several people at a time. Made from the strong roots of a species of the Indian rubber tree that grow and thrive on the slopes of the Jaintia and the Khasi hills, it is a major attraction and most unique in the world. Some bridges are more than 500 years old and can bear the weight of more than 50 people. The best of these bridges is the Umshiang Double-Decker Root Bridge, which are two bridges stacked up on each other.

Mawsmai Caves - Mawsmai caves 6km away from Cherrapunji, is a fascinating destination that deserves a mention. The limestone caves are a well-lit maze of caves smattered with spellbinding formations of stalactites and stalagmites. While at some places, the openings are big enough to walk, at others its small and have to be passed by crawling. There’s also flora and fauna found aplenty that add to the mysterious air of the cave.

Nohkalikai Falls - Nohkalikai Falls on the East Khasi hills, is an enchanting waterfall and a spectacular sight to behold. At a height of 1,115 feet (340 metres), it is the highest plunge waterfall in India and fourth highest plunge waterfalls in the world.  The waters of the fall look absolutely breathtaking as it plunges majestically from a verdant gorge into a mystic green-hued lagoon surrounded by the lush rainforest.

Dawki - A small town on the international border between Bangladesh and India in the Jaintia Hills, it is a trading hub and a tourist puller for its emerald crystal clear waters of the Umngot River, boat rides, boat riding competitions, greenery and the impressive British-era suspension bridge over the river.

Thangkarang Park –  12 km from Cherrapunji, Thangkarang Park is an ideal spot for nature lovers to spend a wonderful day in nature. It offers a brilliant view of the valleys of the Bangladesh plains, the Kynrem Falls and the Khoh Ramrah rock. Kynrem Fall is a three-tiered waterfall that cascades gracefully from a height of 305 meters, forming a pool at the base. Surrounded by lush green landscape, it is one of the highest falls in Cherrapunji and a stunning sight especially during and after monsoons when it swells up with water and offers a gorgeous view of the water stream hitting the rocks from above the bridge that helps to cross the falls.  The Kho Ramrah rock which is placed opposite to the entrance of the park is a beautiful rock formation in the shape of a cone basket and is also believed to resemble a shiva lingam.

The best time to visit Cherrapunji is from September to May. June received the highest amount of rainfall and should be avoided.

2. Cherrapunji has some interesting caves that a tourist can experience for an adventure of lifetime. While The Krem Mawmluh Cave is a dark and difficult to maneuver with slippery surface and waist high water along with bats for company, the Krem Liat Prah has an enormous passage known as the ‘aircraft hangar’ with rock formations coloured in brilliant hues of orange, red, black, grey, blue, green and white.

3. For the wildlife lovers, a trip to the Nokrek National Park will be a sheer delight to witness the diverse flora and fauna including the rare red panda.

4. The eco-park by the Shillong Agri-Horticultural society is also called the ‘green canyons’ and is an attraction for locals and tourists alike with bewitching views of Bangladesh’s sylheti plains and the exotic variety of the orchids grown in the greenhouse of the park.

5. The wettest land, it has several more awe-inspiring waterfalls such as Dainthlen falls, Wakaba falls and rainbow falls.

6. The Mawkdok Dympep Valley View developed by the government at the beginning of the Sohra tourism circuit is a breathtaking sight of the verdant landscape and tranquil ambience offering peace and calm.

1. Cherrapunji is the second wettest land in India and on the planet.

2. The original name of Cherrapunji is Sohra and eventually evolved to Cherrapinji which means ‘land of oranges’

3. Ironically, despite heavy rainfall, Cherrapunji faces scarcity of clean water and locals travel far and wide to get potable water.

5. The Nohkalikai Falls literally translated means "Jump of Ka Likai" in Khasi and is derived from the legend that a woman named Ka like had jumped off the cliff into the waterfall when she discovered a severed finger and realized that her second husband had killed her daughter and fed the meat to her.

A holiday amidst bewitching waterfalls and lush green canyon.

How to get to Cherrapunji

Flight: The nearest airport is Umroi airport, Shillong located at a distance of 35 km. A cab can be hired from there directly to Cherrapnji

Train: The closest station is Guwahati railway station at a distance of 180km. A cab or bus can be hired from there to Cherrapunji.

Road: Frequent buses for Cherrapunji leave from the Sohra Bus Stand in Shillong. Private car and taxi can also be hired.