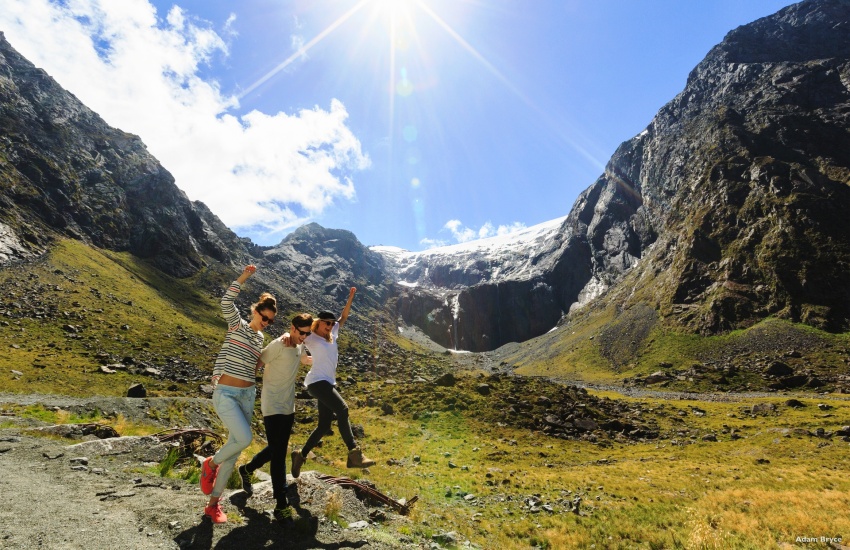 Aotearoa, “The Land of the Long White Cloud”, is a fascinating place to visit. Even though it is blessed with awe-inspiring natural beauty and an adventurous streak, New Zealand is an utterly underrated holiday destination. While every trip to New Zealand is an exciting adventure, the first trip is extra special. Your first sight of New Zealand’s stunning natural grandeur will stay with you forever. With its panoramic vistas, the soaring peaks and the dense forests, it all seems unreal! But the fact is that you will be spending most of your time here outdoors. Hiking around New Zealand is the best way to experience its untamed soul.

New Zealand does have its share of museums, amusement parks and theatres. But the real action happens outside. The spectacular beaches of New Zealand are major hubs for adventure sports while the forests and the mountains are great oases of tranquility that bring you closer to nature like you’ve never been before. There’s something about camping under a starry sky that calms the mind and soothes the soul. The celestial night show played out on the clear night sky is a photographer’s delight and a magical experience. Go ‘tramping’ and spend a night at one of the many mountain huts that are spread all over New Zealand. So, if you’re ready to sample the smorgasbord of delights that New Zealand sets offers, get your backpack ready.

Let’s take a closer look at some of the places you should not miss on your first visit to New Zealand.

1. Auckland - The City of Sails

But first, let us quickly look at some tips and travel hacks for new visitors.

When it’s your first time in New Zealand:

Preparedness is the key to a hassle-free travel. Before you follow the Hobbits’ trail deeper into the Middle Earth, here are some things you should know.

Auckland - The City of Sails:

Auckland is New Zealand’s largest city and is considered the country’s only true metropolis. The erstwhile capital is the economic heart of New Zealand that beats to the rhythm of the ocean. The “City of Sails” boasts of a large harbour that drives a thriving sailing culture. Explore the Quay Street and catch a ferry to the Hauraki Gulf islands from the Princess Wharf. Jump off the Auckland Harbour Bridge for a 43-metre-high rush of adrenaline. If bungee jumping is not your cup of tea, simply admire the views from the top.

Delve into history at the imposing Auckland War Memorial Museum that displays an amazing collection of artefacts dating back to the time of the country’s first Polynesian settlers. Peer into the cosmos at the Stardome Observatory and explore the life underwater at SEA LIFE Kelly Tarlton’s Aquarium. The New Zealand Maritime Museum showcases the country’s mystic bond that it shares with the ocean.

Rotorua is the place to be for an up-close look at the Maori culture. Wai-O-Tapu is a multi-hued hotbed of geo-thermal activity. The bright orange “Champagne Pool” and vibrant green "Devil’s Bath” will fascinate you with their colours. The crystal clear Hamurana Springs are a stunning contrast to multi-coloured thermal pools. But the real fun begins at the Waikite Valley Thermal Pools where you can soak away your tiredness in the naturally formed free pools. Lake Tarawera makes for an exciting day trip with its collection of rugged scenery, natural hot pools and magnificent waterfalls, not to mention the lakes itself.

Wellington is New Zealand’s cultural as well as political capital. This vibrant harbour city is a microcosm of the country’s cultural and natural abundance. Spend an afternoon at the Te Papa Museum which is a treasure trove of New Zealand’s history. Take a tour of “The Beehive”, the Parliament, which is the country’s seat of power. Wellington is a city of varied experiences. Head to Courtenay Palace for a taste of the city’s lively nightlife or take a peaceful evening stroll along the waterfront. The Cuba Street will satiate your hunger pangs with heart-warming delicacies.

Mount Victoria affords some of the most stunning views of the city’s harbour nestled against the peaceful ocean. You can easily spend a day at Oriental bay, which is Wellington’s most popular beach. Be sure to check out Zealandia, which is a first-of-its-kind enclosed urban eco-sanctuary. Wellington Cable Car is the country’s last functioning funicular railway system. It is your gateway to the Botanic Garden, Cable Car Museum and the Carter Observatory.

Christchurch lives up to its moniker “The Garden City” with an abundance of greenery that overflows from its gardens and landscape. It is South Island’s largest city and offers you a multitude of experiences with its churches and cathedrals, gondola rides and trolley tours. The Christchurch Botanic Gardens is a painstakingly curated collection of native trees and plant conservatories. Go River Punting on the Avon River for a leisurely tour of the city’s outdoors. Take a picnic at Hagley Park which is the largest open space in the city. It is also the venue for many of the city’s outdoor cultural events.

Pay your respects at the Bridge of Remembrance, which is one of the city’s two main war memorials. It commemorates the valour of those who fought in the first world war. The Port Hills are a collection of trekking and bicycle trails that pass through undulating hills amidst some of the most beautiful sights in Christchurch. Travel to Greymouth on the TranzAlpine railway line and take in the stunning sights along the way.

When a city sits at the base of a mountain called Remarkables, you can expect it to be a thrill-ride full of fun and adventure. Queenstown is known as “The Adventure Capital” of New Zealand for good reasons. It offers you skiing at the Remarkables, jet boating on the Shotover River, bungee jumping at the Skippers Canyon and an assortment of Heli-hikes to the nearby Milford Sound. If you’re really looking for adventure, head out to Nevis Valley. The 134-metre-high Nevis Bungee platform is the third highest in the world and features the world’s biggest rope swing.

But Queenstown does have its share of tranquil pursuits. The Stunning Lake Wakatipu is a stunning sanctuary of peace that is also a thriving picnic ground and a hub of outdoor activities. Take the Skyline Gondola to Bob’s Peak for some of the best views of Queenstown. You can also trek to the top through the Tiki Trail if you’re up for it. The Gibbston Valley Winery lends a touch of class to wine-tastings with its signature Pinot Noir.

Dunedin is perhaps one of the most unknown cities of New Zealand. It is the country’s very own piece of Scotland. The town was founded by Presbyterian Scottish immigrants and wears its legacy proudly. It is home to Baldwin Street, which is the steepest residential street in the world. It also houses the Larnach Castle, which is the only castle in the whole of New Zealand. The Otago Museum is the showcase for New Zealand’s natural and cultural heritage. The butterflies in the Discovery World is the undisputed highlight of this museum.

The Toitu Otago Settlers Museum  concentrates on the region’s first settlers and chronicles the 19th-century gold rush of Otago. Even Dunedin’s railway station is a work of art flaunting the Edwardian Baroque style of architecture. But one of the most popular attractions here is the Tunnel Beach. Reaching the beach requires you to climb down 72 steps, go through a tunnel and then climb back up again. The sights that awaits you at the other end makes it all worth the effort.

So, there you have it! Our selection of places you should visit on your first trip to New Zealand. While you shouldn’t miss these places, do not restrict yourself to these. New Zealand is all about going off the beaten path and carving out your own towards an epic adventure. We offer a wide range of holiday packages that show you New Zealand like no others. Book your holiday online or drop into your nearest branch for a customised holiday.