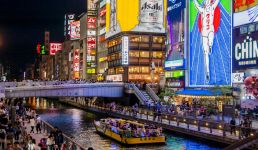 This is the second largest metro city in Japan. It is also the economic center of the Kansai region. Just like Tokyo, Osaka was formerly known as Naniwa. In fact, before the Nara Period, Osaka is known to be the first Japanese capital city as there was a tradition of moving capitals under every new emperor. Today Osaka is busy modern city and an economic powerhouse in Japan.