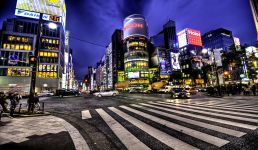 Tokyo is the capital of Japan and among the most populated cities in the world. Although Tokyo wasn't always referred to as Tokyo, before 1868, the city was referred to as Edo. During the 16 the century this was a small castle town which quickly became prominent as Japans political center in 1603 under the leadership of Tokugawa Leyasu. Within a few decades Edo becomes one the most populated cities in the world. It was not until two centuries later in 1868, i.e., after the Meiji Restoration when that the city was remanded Tokyo and replaced the Kyoto as the countries capital city.

But Tokyo's history is also laced with many natural and human disasters, most notable of which is the Great Kanko Earthquake which occurred in 1923 and the air raids in the year 1954, i.e., during the second world war. But Tokyo has come a long way since then and is now among the most famous metropolis if the world. Tokyo offers tourists an unlimited array of choices when it comes to dining, culture, entertainment and most of all shopping. There are also some museums, gardens, and temples that you can visit. Contrary to conventional perspective, Tokyo has numerous green spaces such as parks that you can visit and spend an entirely peaceful day away from the hustle and bustle of the city.

Activities: Attend the Cherry Blossom Festival, Go shopping in one of the many shopping districts and visit a bar in Tokyo’s Golden Dai District.