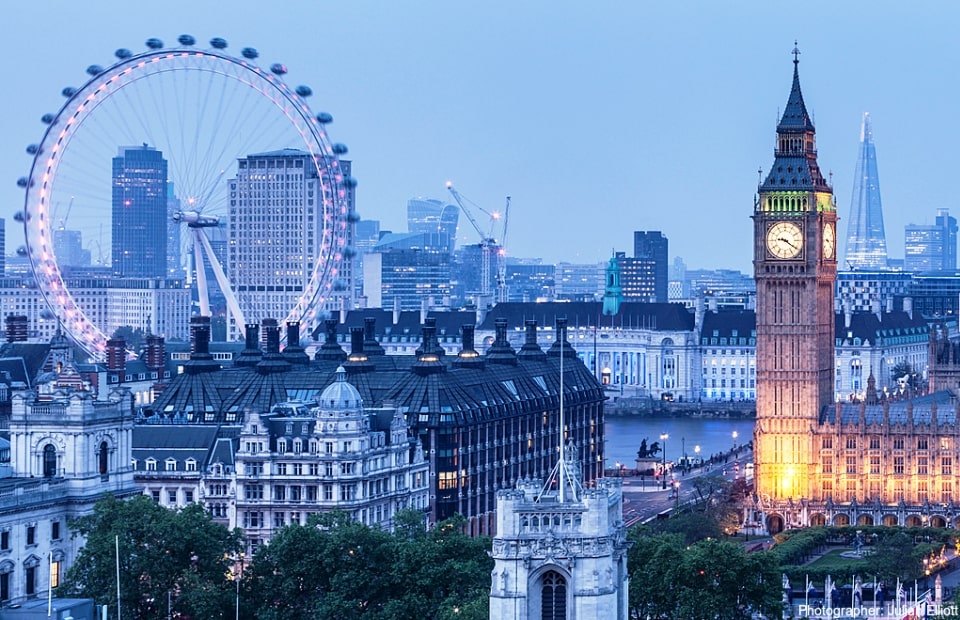 When you think of London, you immediately think of Big Ben, the monument is that synonymous with the city’s culture. This iconic landmark is immensely popular with tourists and even the locals have a soft spot for it in their hearts. Big Ben (now rechristened Elizabeth Tower), stands tall at 96 metres and has the world’s second largest four-faced chiming clock.

Big Ben is in London, located near of the Palace of Westminster (not to be confused with the nearby Westminster Abbey).

Big Ben is open to visitors all year around. The complete tour takes about 1-1.30 hours.

The Big Ben has fallen silent for the first time in its 157 years of almost continuous timekeeping. The iconic landmark is being restored and repaired, and will begin sounding its famous chimes until 2021. However, the structure still stands and while you might not be able to synchronise your watch to the sound, there is much that you can see and enjoy around the Big Ben.

The Houses of Parliament

Attached to the clock tower that houses Big Ben is the Houses of Parliament, and the best part is that visitors are welcome. If the House of Commons or House of Lords are in session, the public can go inside and sit in the public galleries.

The Westminster Abbey is open for services on Sundays and the public can worship here free of charge. Step inside and see where British monarchs have been crowned for centuries. This is also where Will and Kate exchanged their heartfelt vows.

The Westminster Bridge gives you incredible views when you walk along it. Stop and admire the Parliament, the Strand, Whitehall, South Bank, and the London Eye, while allowing the sounds and smells of London to wash over you.

If you enjoy a bit of history you will definitely get a kick out of visiting the underground bunker where Winston Churchill worked and occasionally lived during World War II. Do visit the Map Room which has been untouched since the day the lights were switched off in 1945.

Like horses? Take a quick trip to the original 18th century stables and watch the cavalry guards work on their horses (via a glazed partition). If you time your visit correctly, you can see the Changing of the Queen's Life Guard at 11 am, which takes place daily on Horse Guards Parade.

This is a fine 16th century building with medieval and modern stained glass. It sits between Westminster Abbey and the Houses of Parliament.

The Supreme Court is known to be the highest court in the United Kingdom. It is located in the former Middlesex Guildhall, a striking stone structure built by Scottish architect James S Gibson with decorative external sculptures by Henry Fehr.

Best known for the house at 10, Downing Street, this location is at the heart of Westminster and of course, British politics. Unfortunately, it is closed to members of the public. You can peer past the carefully guarded gated and armed police to try and get a glimpse of the Prime Minister.

As you walk further from Downing Street, you will enter Whitehall, a historic London street which runs from Parliament Square at Westminster to Trafalgar Square. This is, quite literally, the centre of the British Government as many departmental and ministerial buildings are located on either side.

Entry inside Big Ben is only for citizens of the United Kingdom. With its current restoration work anyway there will be certain limitations on your sightseeing.

You can book yourself on a tour of Big Ben and the surrounding buildings. This way you can glean all the historical facts and get a deeper understanding of the monument.

The ticket price for the tour is:

Big Ben is a popular tourist destination in London which is visited by everyone who is on a tour of England. If you are interested in ticking-off iconic landmarks, Big Ben comes highly recommended.