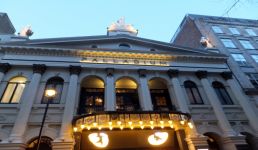 This holiday season step out to experience the world of pantomime. This year the London Palladium brings to you Snow White show which will feature all the sparkle, scale and spectacle London has come to expect from the West End’s most lavish festive production in a show packed full of hilarity, awesome music, special effects, pop culture references, glamorous sets and theatrical magic.

The world’s most favourite childhood story is brought alive via a lavish spectacular pantomime performance from the team that brought the Best Family & Entertainment Olivier Award-winning show Dick Whittington in 2017. The star-studded cast includes Dawn French, a legendary, award-winning writer, actress, and veteran of the UK comedy scene who will be making her pantomime debut along with royalty pantomime royalty Julian Clary, Paul Zerdin, Nigel Havers and Gary Wilmot joined by Strictly Come Dancing’s Vincent & Flavia. West End and Broadway star, Charlie Stemp will return to The London Palladium pantomime as The Prince along with Over the Rainbow winner Danielle Hope as Snow White.

‘Snow White’ follows the story of a beautiful princess with lovely blue eyes and unblemished fair skin. Her father, the King remarries after her mother dies when Snow White is very young. The extremely beautiful new queen is as cruel as she is pretty. She would often ask her magic mirror, “Who is the fairest of them all” and the mirror would reply that she was. However, one day when she asked this same question of the mirror, the mirror replies, “Snow White is the fairest of them all”. Enraged and filled with envy, she orders her guard to kill Snow White and bring back her heart. The guard takes her to the forest, but soon takes pity on her and spares her life.

Lost and alone in the forest, Snow White wanders around until she chances upon a small cottage belonging to seven dwarfs. She goes inside to find it empty with seven tiny beds. After eating, she goes off to sleep and is found by the dwarfs, when they come back home at night. Soon, the dwarves start loving and caring for Snow White and she ends up staying with them. Meanwhile, back at the palace, the queen again asks the mirror "Magic mirror on the wall, who is the fairest one of all?" The mirror tells her that Snow White is still the fairest in the land. Finding out that Snow White is still alive, she devises cunning plans to kill the girl but is unsuccessful every time as the dwarves save her.

She finally dresses up as an old woman and offers Snow White a poisoned apple to eat. The princess unknowingly eats it and falls into a deep sleep. This time, the dwarfs are unable to revive Snow White. Assuming, that she is dead, they place her in a glass casket. One day, while Prince Charming is meandering through the forest, he stumbles upon Snow White lying in her glass coffin and instantly falls in love with her. The seven dwarfs succumb to his entreaties to let him have Snow White. He kisses the princess and she instantly she comes back to life. The two fall in love with each other, eventually get married and live happily ever after.

Price from (In INR approximately)

Interesting Facts About the Snow-White Show

How to get to the London Palladium