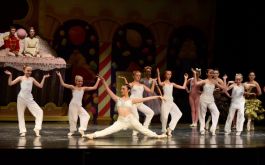 The Nutcracker show is a brilliant ballet rendition and a perfect addition to the Christmas sparkle. A classic two-act ballet performance, The Nutcracker is a Christmas spectacular masterpiece that has attracted millions of attendees annually.

Scored by the world famous Russian Composer Pyotr Tchaikovsky, written by E.T.A Hoffmann and adapted from Alexandre Dumas’s version, the endearing play is brought to live by a dazzling performance from 100 ballet dancers, musicians and a magical set. Based in a frost covered Edwardian London, enter the enchanting world of little Clara on Christmas eve as she and her family host a family dinner to which Clara’s godfather, Drosselmeyer arrives and gifts her a wooden Nutcracker doll. Unbeknownst to her, the doll has a magical spell and as midnight strikes, it comes alive along with the other toy soldiers. All of a sudden, mice start running about the room and as the Christmas tree starts rising higher, the toy soldiers along with the Nutcracker fight a battle with the evil Mouse King. Defeating the Mouse King, the Nutcracker and Clara hop on a hot air balloon ride across London to the winter wonderland of Sweets wherein the beautiful Sugar Plum Fairy welcomes them. The ballet ends with an ethereal performance from the cast.

Interesting Facts About the Nutcracker Show

How to get to

The nearest underground station offering step-free access from street to train is Green Park. Buses 9 and 10 travel from Green Park to the Hall.

Victoria and Paddington are the nearest National Rail stations, each are an approximate 30 minute walk away but offer tube and bus connections.

The following buses can be taken to the venue:

London Coliseum is situated between Leicester Square and Charing Cross tube stations, which give alternative access to the Northern, Bakerloo and Piccadilly lines.

From Charing Cross, walk to the end of Charing Cross Road, across Trafalgar Square and onto St Martin’s Lane, where the theatre is located on the right.

From Leicester Square tube station, turn left out of the station and walk behind Wyndham’s Theatre, following the route onto St Martin’s Lane. Turn right and walk down the road, past the Duke of York’s Theatre until you reach the end of the road. The London Coliseum should be on the left. This walk will take about 5 minutes.

Bus routes that stop along Charing Cross Road, close to the London Coliseum, are: 24, 29 and 176.