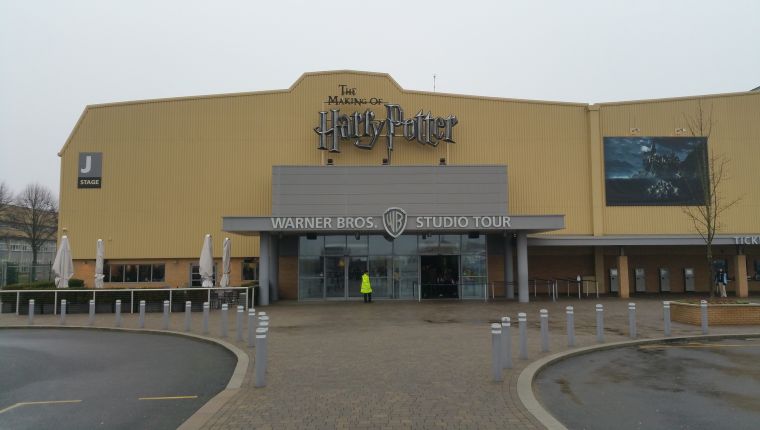 The Warner Bros. Studio Tour London offers an authentic behind the scenes glimpse of the Harry Potter films. A treat for the Harry Potter fans all over the world, the tour opened to the public on 31 March 2012 and since then has attracted children and adults to experience the magical world of wizardry.

Embark on an exciting and thrilling journey as you step into the enchanting world of Harry Potter and explore the fascinating and stupendous sets and learn about the making of the film.

Great Hall – The spectacular Great Hall was first built for Harry Potter and the Philosopher's Stone in 2000 and since then has been used in 6 more films featuring as the backdrop in iconic scenes such as the Yule Ball and the Battle of Hogwarts. The Great Hall is home to some of the beautiful hand-crafted props created for the Harry Potter film series including Professor Dumbledore’s lectern and the House Points Counter and showcases the costumes of students from each Hogwarts house plus two large tables which are set for dinner; at the top of the room is the teachers' table where the Hogwarts Professors sat.

Forbidden Forest – The set was created at the the Studio for Harry Potter and the Chamber of Secrets in order to house Aragog’s lair and continued to grow throughout the film series. It is filled with 19 trees each with a diameter of over 12 feet.

Platform 9 ¾ - Climb aboard the iconic locomotive, the Hogwarts Express and see the infamous ‘cupboard under the stairs’. The train and the platform were recreated in the studio during the filming of Harry Potter and the Deathly Hallows – Part 2. Though most of the scenes that take place on Platform 9¾ were actually shot on location at King’s Cross Station, a special interior carriage set was used for all of the scenes that take place inside the train. Visual effects artists replaced the green screen background in the windows with moving backdrops and special effects like hopping Chocolate Frogs and flying Dementors.

Diagon Alley – A makeshift set, the original design of the street combined the rich details from the Harry Potter books with inspiration from the streets described in the works of Charles Dickens. Diagon Alley is home to Gringotts Bank, Flourish and Blotts and Mr Mulpepper’s Apothecary and the dusty Ollivanders wand shop, where Harry’s wand famously chose him.

Potions Classroom –  Marvel at the vast array of over 950 potion jars that line the walls of the classroom, each with unique props kept inside them including baked animal bones from a local butcher shop, dried leaves, herbs and shrunken heads made by the props department.

Memory Cabinet – Stumble into Professor Dumbledore’s office wherein you will be amazed to find nearly 900 memory vials and labels. Some of the memories seen in the cabinet feature familiar character names such as Argus Filch and Professor McGonagall.

Professor Umbridge’s Office – Explore the only pink office in the Ministry of Magic, belonging to Professor Dolores Umbridge. Over 130 plates were created for the office which involved filmmakers having to photograph and film real kittens with crystal balls, witches’ hats and balls of wool.

Puking Pastilles – A funny and simultaneously disgusting is the 20- foot mannequin of the Puking Pastilles Dispenser at the main entrance.  Stocking everything from Extendable Ears to fireworks, Weasleys’ Wizard Wheezes was designed to look like an 18th century storefront.

Quidditch – View the uniforms created for the wizarding sport of Quidditch which evolved throughout the film series, going from thick robes in the first two films to lighter, sportier robes with the players name and number on the back in the later films.

19 Years Later - The final scene of Harry Potter and the Deathly Hallows – Part 2 called for an older Harry, Ginny, Ron and Hermione to bring their children to King’s Cross station to send them off to Hogwarts School of Witchcraft and Wizardry, nineteen years later. They are seen in a palette of pinks, oranges, blues and browns worn by them throughout the film series.

Yule Ball - The Yule Ball held to celebrate Christmas and the Triwizard Tournament presented an opportunity for the Costume Department to create a more formal style of wizard wear. It took three months to create Hermione’s iconic gown that was made of yards of pink silk and 12 metres of chiffon, layered to form a beautiful, romantic gown. A kind of ‘Wizard’s Tuxedo’ was created for the Hogwarts boys in a satin silk while the Durmstrang students had military dress uniforms. Ron Weasley was the only exception with robes made from an old carpet fabric and acres of lace.

Beauxbatons - Led by headmistress Madame Maxime, the students of Beauxbatons Academy of Magic visit Hogwarts as part of the Triwizard Tournament in Harry Potter and the Goblet of Fire. The “French Blue” fabric of the Beauxbatons uniform was chosen to stand out from the muted blacks, browns and greys of the other school colours. The iconic pointed Beauxbatons hat was designed and produced by renowned milliner Philip Treacy.

Buckbeak - Three life-size animatronic versions of Buckbeak the Hippogriff were created for the Harry Potter film series: one standing, another rearing and a third lying down. The designers of Buckbeak took inspiration from real birds, specifically the Golden Eagle for the creature’s profile.

Goblin Heads - Goblins in the Harry Potter film series act as bank officials and tellers at Gringotts bank in Diagon Alley. Each goblin was given a particular personality perceptible in their distinctive ears, chins and noses to ensure they all looked different. To create the scene inside Gringotts Bank in Harry Potter and the Deathly Hallows – Part 2, 140 make-up artists from all over Europe were needed to turn 60 actors into goblins in just four hours. Goblin prosthetics could also not be reused after they were removed at the end of the day’s filming and so multiples of every goblin head were created for each day of the shooting schedule.

Aragog had a leg span of over 18 feet and was even able to crawl out of a hole and deliver dialogue in Harry Potter and the Chamber of Secrets. Each of Aragog’s hairs was individually inserted by hand using a special needle using many different materials from brooms bristles and pieces of coconut to the centre of feathers. On set for Harry Potter and the Chamber of Secrets, it would take over 15 people to operate the animatronic Aragog, four of which would be behind the scenes acting as puppeteers for the back four legs.

Marvel at the spectacular models that were created for the movie franchise to bring the book alive with fantastic visuals. See the stunning Hogwarts Castle Model who’s every courtyard, tower and turret were filmed and enhanced with digital effects to create unforgettably realistic views of the magical school, from Potions textbooks to wizarding sweet packaging and issues of the Quibbler, the Art Department was responsible for designing and creating wide array of props that helped to bring the visual world of Harry Potter to life on screen, the beautiful White Card Models that helped the director and production designer look at size and scale and determine camera angles and the technical drawings that helped created every environment, prop and character of the Harry Potter film series. 588 sets across the Harry Potter film series.

The movie series relied heavily on the special effects that brought the magic alive on screen. Witness the Chamber of Secret Door, the Invisibility Cloak, Whomping Pillow and the Green Screen. The Green Screen is used by filmmakers to shoot visual effects allowing them to replace the green colours with a completely different background or computer-generated set.

Indulge in a once in a lifetime opportunity to take part in the green screen experience and fly a broomstick over London just like the cast did during filming.

At the end of the mesmerizing tour, shop at the studio shop that offers a range of specially selected collectible items, replica wands, confectionery, apparel and much more to commemorate the fantastic trip to the unique world of Harry Potter.

How to get to Warner Bros. Studio Tour London - The Making of Harry Potter

Regular shuttle buses, operated by Mullany's Coaches, run from Watford Junction to the Studio Tour with a journey time of around 15 minutes. Buses run every 20 minutes from 9.20am (with additional services available from 8.15am when the first tour is at 9am).