Bunjee Jump Across In New Zealand 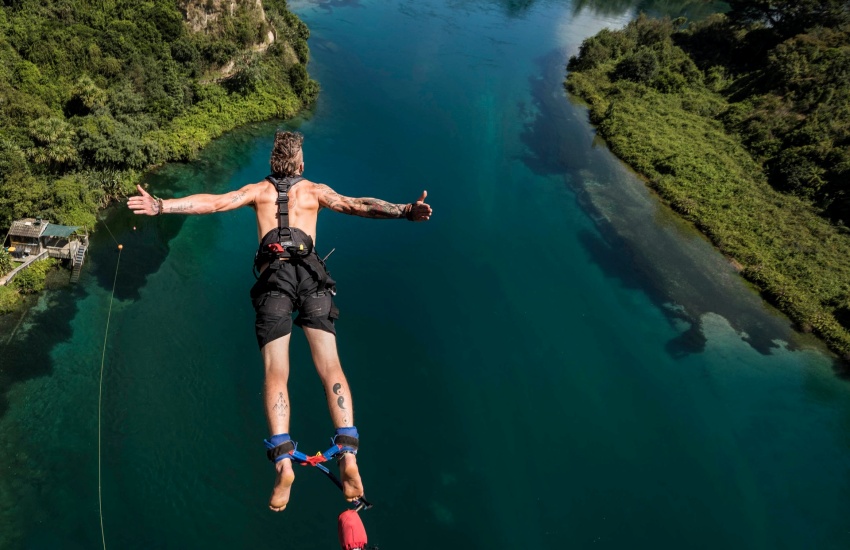 That split-second feeling of trepidation followed by that overwhelming rush of undiluted excitement. The rush of wind as it takes you by surprise, just as the sudden drop does! And most importantly, that mixed feeling of freedom, liberation and euphoria. Truly, bungee jumping is more than just ordinary fun! As an adventure seeker, you’d be committing blasphemy of the highest order if you do not bungee jump at the birthplace of bungee jumping. New Zealand is the spiritual home of bungee jumping and one of the best adventure destinations in the world for experiencing the joys of the sport, in its true glory.

The idea of bungee jumping is inspired by the centuries-old, coming-of-age ritual for boys on the island of Vanuatu in the South Pacific. The boys would pass into manhood after jumping from tall structures, with vines tied to their feet. While bungee jumping has evolved over the years, the basic premise remains unchanged. You jump from a height over hundreds of feet, tied to an elastic nylon cord and pull to a stop just short of the ground which is rushing to greet you at an astonishing speed. But what has changed for better is the safety aspect of this adrenaline-pumping sport. Auckland’s most recognised landmark is also its biggest adventure destination. With the bungee pod attached under the bridge, you dive straight down 40 metres and high-five the ocean before bobbing back up. When you book your jump here, you get a free ride to your jump point in the Bungy Bus which starts from the Auckland Sky Tower five times in the day: 9:00 am, 10:30 am, 11:30 am, 1:30 pm and 2:30 pm. Make sure you’re there at least 10 minutes early to catch the bus. Minimum age limit is 10 years and children under 15 need a written consent from parents or accompanying adult. Taupo Bungee lets you share the rush of joy and excitement with a partner with a tandem jump. The 47-metre-tall drop is New Zealand’s only cliff-top bungee jump. As you stand at the edge of the cantilevered platform, the Waikato River at the bottom awaits your caress if choose to be dunked at the end. It also offers you the option to combine bungee and swing to double your thrill. Located only five minutes from central Taupo, the bungee site is well connected with public transport. Or you could simply hire a car to reach. Book your tickets in advance and save money with the Early Birds Deals.

The Ledge Bungy and Swing, Queenstown

Do you want to enjoy the thrilling rush of a bungee jump against a dark backdrop studded with twinkling lights in the distance? The Ledge Bungy and Swing in Queenstown offers you bungee jumping at night, the only one to do so in New Zealand. Sitting atop Bob’s Peak, the Ledge can be reached after a short Gondola ride. You’ll be treated to gorgeous views of the lake and the mountains around, before you harness up for your jump. The Ledge offers the most varied jumping experience, combining the fun of the swing with the excitement of bungee. Flip, twist or somersault your way down the ledge and create the memories of a lifetime.

This is where it all started! New Zealand’s first-ever commercial bungee jump is still operational and is as exhilarating as ever. Kawarau Bridge Bungy take their safety very seriously and the staff always double-checks your harness before your jump. The 43 metre drop might be tame for seasoned adventure seekers, but is still an exciting adventure, especially for newbies. Share your excitement with a tandem jump. If you’re not yet ready for your first jump yet, you can watch others jump from the observation deck as you psych yourself for your own jump. This one is recommended for its cultural importance and of course, its wild excitement.

Go big or go home! The 134-metre-high Nevis Bungy in Queenstown is New Zealand’s highest and the third-highest free-falling bungee jump in the world. The 8.5 seconds of free-fall is pure joy fuelled by a massive surge of adrenaline that is an exhilarating mix of fear and freedom. Suspended between two clifftops, the jump-off platform will add to your anxiety while approaching. But reaching this bungee point, over the challenging Nevis Road, is almost as exciting as the jump itself. The easiest way to reach is the Bungy Bus which departs from Queenstown Bungee Centre at regular intervals between 9:20 am to 2:40 pm. Be sure to check in at least 30 minutes before your bus is scheduled to leave.

As a beginner, you will love the Hanmer Springs Bungy for its comparatively tame 35-metre fall over the Waiau River. Hanmer Springs is known more for its soothing hot springs and relaxing thermal pools. But this bungee jump is its Hanmer Springs’ sole adventure activity. Enjoy the scenery rushing by as you jump off from the 135-year-old Ferry Bridge in a classic swan dive into the alpine river valley below. This is a highly recommended experience to build up your confidence and conquer your fears before you take on the big boys elsewhere. You can also enjoy jet boating, quad biking and river rafting, while you’re there.

Enjoy the unbridled thrill of a rousing adventure, bang in the middle of Auckland’s Central Business District. Bungee jumping from Sky Tower, the tallest building in New Zealand, is a bit different from other places. The jump is more of a controlled descent guided along two supporting ropes acting as rails to prevent you from bouncing into the building. The 192-metre jump is 11 seconds of pure adrenaline rush and lands you 53 floors down into the SKYCITY Plaza below. You can also try the Skywalk where you walk along the edge at the top of Sky tower without handrails. It is as exciting as the jump and highly recommended. Getting to Sky Tower is easy as you can simply hop on to public transport or hire a cab.

The land of stunning natural beauty is also the land of uninhibited adventure. Be it the cities or the outdoors, you can have the thrill of a lifetime almost anywhere in New Zealand. Even in the land where adventure is a part of outdoor activities, bungee jumping stands out with its pure rush of thrill and excitement. Choose from a range of New Zealand holiday packages and book your holiday online. Take that leap on your next holiday and we promise you, you’ll be hooked!