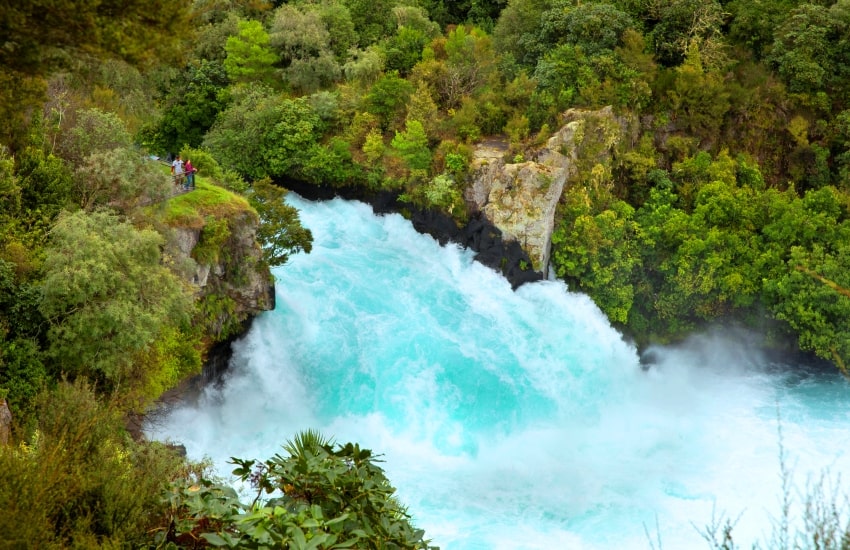 While water bodies such as streams, lakes, rivers, beaches make for a relaxing holiday attraction, none of them make for as captivating a scene as waterfalls. Water speeding its way down with all its force, sprouting greenery all around it, making a heavy gushing is a sight that both calms and thrills. Huka Falls is one such waterfall, and probably the only one of its kind. Once you visit Huka Falls, its memory will be etched in your mind forever. Located around 1.5 km from the town of Taupo, Huka Falls enters the Waikato River after its descent. The Waikato River is the longest river in New Zealand. Other than its majestic appearance, Huka Falls has other interesting facets.

Timings: While there are no timings to go on a walk to the Falls, if you’re driving there, the parking area is open only from 8 A.M. to 6 P.M. every day.

How to get to Huka Falls:

The biggest attraction for tourists remains the easy accessibility of this wonderland. Huka Falls is just a five minute drive by car or bus from Taupo town centre. But one would wish that the journey would last longer, owing to the lush green forest-clad road. There are daily bus services from Taupo, several times a day, that ferry visitors there.

There is a fascinating history about the name of the waterfall. The word 'Huka' means 'foam' in Māori, aptly named after its appearance owing to the fast, gushing flow of the water. This, then, brings us to yet another interesting fact about the Huka Falls. It is said that the rate of the water flow is so high that it would fill an Olympic swimming pool in just under eleven seconds! Yes, that's the kind of speed we're talking about.

There's quite a simple explanation behind this. The Waikato River is almost 100-metres wide, but when it passes through a hard-volcanic canyon, its width is forced to reduce to only 15 metres. This sudden narrowing down causes the water pressure to increase immensely, thereby making it fall rapidly, giving it a foamy appearance. In fact, you would be amazed to know that 2,20,000 litres of water pass through the Huka Falls every second.

Huka Falls is not the only scenic beauty to explore in the vicinity. You can also enjoy a quiet picnic in the area or can spend the day exploring nearby trails on foot or on a mountain bike. You can visit the Spa Park, which is an hour-long walk along the entire length of the Waikato River. You will also get to relax your feet in the Spa Park Hot Spring. The trail is lined with exotic and indigenous trees. With each sturdy tree that one passes by, the sound of the falls gets louder.

It is no surprise then that Huka Falls is the most-visited natural attraction in New Zealand, whether by locals or international tourists. To elevate the experience, there are now facilities to take a jet-boat ride or a river cruise till the pool formed at the base of the falls. Standing near the pool, one could enjoy the light, cool splashes of water falling gently on them.

The fall also has a foot-over bridge right at the top, adding to the attraction of site. Of course, we would recommend a cruise or jet-boat ride for a closer look at the falls. There is only one company, however, that facilitates these jet-boat rides, and so, all visitors are advised to make their bookings well in advance. These boats, that run at an average speed of around 80 km/hour, are a perfect balance between experiencing thrill and relaxation.

We understand that a sight such as this would leave the soul wanting for more. For the insatiable nature lover within all of us, there are some amazing beaches and bays surrounding Lake Taupo, which are also worth a visit. Kayaking across this lake, which happens to be New Zealand’s largest lake, is considered to be the treat of a lifetime.