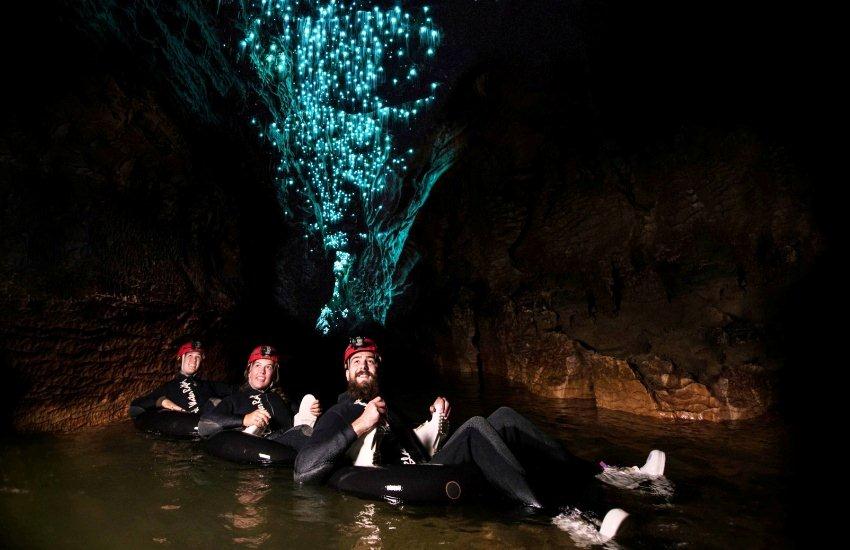 Ever been to an underground Glow Worm Cave? New Zealand is Your Cave Haven

Step outside at night and you’ll see a sky full of stars. Simple, right? Well, what if we challenged that, though? What if you went to the innermost corners of the earth, right under ground, where sky isn’t permitted, to see the stars? In New Zealand, it is possible. All thanks to something called: Arachnocampa Luminosa. Commonly known as the glow worm.

These shimmering insects live inside the caves of New Zealand, emitting a soft blue-green light. A million of them living in a cave, rivals the sight of any galaxy or star-crusted sky. So, what are you waiting for? Grab a paddle boat, wear comfy shoes, take a deep breath and prepare to descend into the bioluminescent beauty of New Zealand’s caves.

First, let us illuminate you on what makes glow worms glow…

As we’ve mentioned earlier, these glow worms emit light through their bodies. Contrary to popular belief, these insects aren’t worms, but larvae or maggots. They’re usually found in shaded, protected areas with a high humidity level (making caves the perfect homes for these illuminating insects.) Glow worms spin silky snares coated with mucous. Each snare consists of tubes, where glow worms can hang. Glow worms will then exude a soft glow, attracting insects to the sticky silk fibres. The blue-green light is a product of a chemical reaction between enzymes and the oxygen in the air. One of earth’s greatest lightshows, produced by one of its most basic needs – hunger.
How incredible is nature?

What caves should you visit to find these glow worms?

Located on the Western shore of Lake Te Anau, this fascinating network of caves boasts of stunning rock formations before you glide into the gleam of glow worms. Geologically, the Te Anau caves are quite young – a mere 12,000 years old. The caves are still being formed and shaped by the waters that flow into them. Spend a wonderful time observing the beauty of the lake outside, before slipping into the dark cave to discover this natural wonder.

A quick 10-minute drive from Tauranga will bring you to the shores of McLaren lake. This outing will be a more hands-on process, as it combines two great adventure activities into one – kayaking and glow worm watching. At least an hour and a half of your three-hour guide will be taken up by kayaking. All equipment is provided but do ensure to dress in warm layers. The tours usually depart before sunset, so that the cave is perfectly dark for that quintessential glow worm experience. During the day, the surrounding areas offer a plethora of activities such as bush walks, bird watching and great spots to have a picnic. Make a day out of it!

Say glow worms, and the first name that pops up is Waitomo. Easily the most accessible of all caves, Waitomo is a short drive from cities like Auckland and Hamilton. The caves are a glow worm paradise. You can go on a guided glow worm tour, take a smooth underground cruise or take part in adrenaline spiking activities like abseiling or blackwater rafting.

Glow worms seem to exist in a galaxy of their own, and no place exemplifies that like the Paparoa National Park. To reach the caves, you’ll need to catch the Rainforest Train, travelling through the ancient rainforest and massive limestone cliffs in the Nile River Canyon. From there, take a short walk to the entrance of the Nile River Glow Worm Cave. This ancient, serene wonderland features natural limestone sculptures and calcifications before treating your eyes to the streams and streams of lights emitted by millions of glow worms. These tours typically depart from Charleston (in the West Coast of the South Island).

Every corner of earth has a story to tell, and at Kawiti you’ll hear that story. These caves are owned and operated by the Kawiti family, who have guided the steps of thousands of travellers over the last 50 years. Take a walk down the wooden boardwalk through the 200-metre limestone cave network, while the glow worms’ shimmer above you. This experience also gives you a chance to get closer to the glow worms, to see the actual bodies of these insects and the light emitted from their tales. Guided tours may also include the Māori legends about these caves.

Looking to veer off the beaten track? Then Waipu caves are perfect for you. Getting to the caves is a mission in itself. You’ll need to bypass the gravel roads and hills in the Northland region, but the effort is worth it. These caves are uncrowded and untouched, exposing you to nature’s pure beauty. Grab a torch and comfortable shoes (you’ll need to do some paddling in shallow water). Once you reach the areas with glow worms, make sure you turn off your torch and stay completely silent. Glow worms can be shy, so try not to antagonise them.

If you’re on a budget, this is a perfect option for you. A short two-minute walk from the road, will lead you straight to the glow worm dell. The best part? The experience is absolutely free. Though you may not have the expertise of a guide, the path features boards with information on these incandescent insects. The path is unlit, but you can use the handrails to guide you (bring a torch to help light the way). The perfect time to visit is around dusk, when its dark enough to see the glow worms.

You can also visit Clifden Caves, Okupata Caves, the Oparara Basin and Lake Karapiro to catch a glimpse of these incredible glow worms. Believe us, New Zealand gives you plenty of chances to catch this gorgeous lightshow.

So, now that you know where you can spot glow worms in New Zealand, there are a few things to keep in mind –

If you’re itching to see the glow worms of New Zealand, why not follow your instincts and book a trip to New Zealand with Thomas Cook? We’ll help you book your flight, accommodation and even plan your itinerary and arrange for your forex. Check out our New Zealand Holiday packages, and book a front seat at one of New Zealand’s iconic glow worm