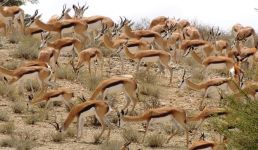 Formed as a result of merger of the Gemsbok National Parks at Kalahari and Botswana, Kalahari Transfrontier Park is the biggest wilderness spots in the world. The first park to be declared transfrontier, it was established in the year 2000 and is located in the South Africa’s remote location of Northern Cape.

It is strewn with hundreds of knobbly camel thorn trees and golden grasslands which dazzle against the red sandy terrain and contrasting blue skies. The beautiful and unique landscape that emerges as a result makes for spectacular photography. The place is well-known for its diverse wildlife and is the home to the regal black-maned Kalahari Lion, amusing meerkats, pompous looking gemsbok featuring their stately V-shaped horns, widely seen nests of dainty weavers and a huge array of birds of prey. Cheetah, hyenas and leopards are some other predators found in this region.

Known For: Black-maned Kalahari Lion, gemsbok and other animals

Operating hours: 6:00 am to 7:00 pm (the timings may differ slightly with changing months)

Tips: Carry a bottle of water, sunglasses, a hat and sunblock and for safari