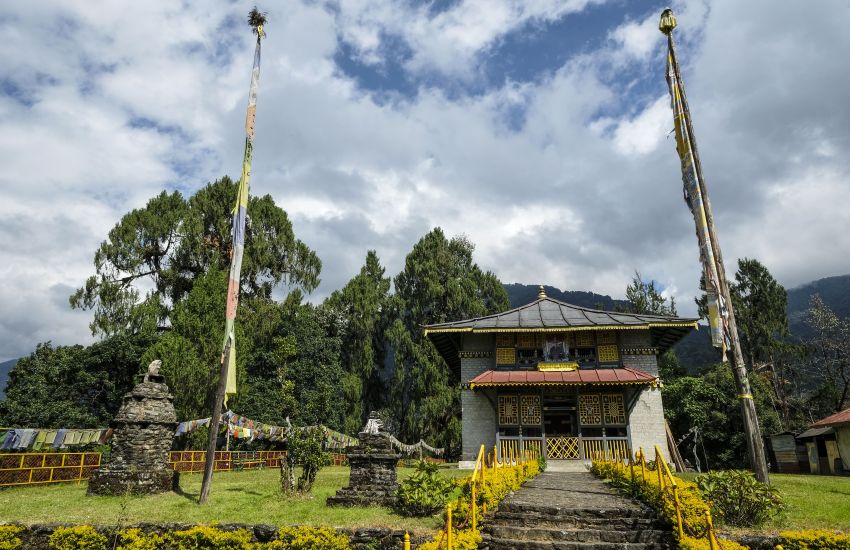 The saying, “Good things come in small packages”, has never been truer. Sikkim, the small state in northeast India is big on stunning natural beauty, spirituality andunique local culture, unlike any other place on earth.

Whether you’re searching for some spirituality or just want to travel back in time, here are the list of the must-visit monuments in Sikkim that showcase Sikkimese culture and history in all its glory!

Dubdi is also known as Yuksum (Yuksom) Monastery and belongs to the Nyingma sect of Tibetan Buddhism. The word 'Dubdi' in the vernacular tongue means retreat. Established in 1701 by Chogyal Namgyal, it is considered to be the oldest monastery in the state.

Marvel at its intricately painted interiors, ancient artworks of divinities, saints and a collection of well-preserved rare manuscripts and religious texts, dating back hundreds of years.

Coronation Throne of Norbugang is the historical location of the crowning ceremony of the first Chogyal king, Phuntsog Namgyal, in the year 1642.After the ceremony, a wall-like structure named Norbugang Chorten, which still marks the original site, was erected in his memory.

Rumour has it that the people who attended the ceremony offered generous treasures, that are still believed to be buried beneath the Norbugang Chorten. The site also has the seats of the 3 Lamas and the king, shaded by a 300-year-old fir tree; a shrine with a huge prayer wheel and the serene Kathok Lake, from where water for the coronation was taken. One must not miss seeing the footprints of one of the three lamas, embedded in a rock opposite the king’s throne.

Travel back in time at Rabdentse–the second capital of the Sikkim Kingdom from the late 17th century until the early 19th century.The capital city was destroyed by the invading Gorkha Army and today, only ruins of the majesticpalace and the chortens are seen here now.

Rabdentse should be right on top of travel lists of history-enthusiasts who want to dig into the state’s past,while enjoyingstunning views of Kanchenjunga Mountain Range. and the gushing river flowing through the foothills.

If you’ve ever wanted to do the Char Dham yatra, but have never gotten around to completing it, the Siddheshwar Dham is where all your spiritual and religious dreams will come true. It is believed that a visit to this place is enough to wash away one’s sins.

Surrounded by mammoth mountains, is an equally colossal 108 ft tall statue of Lord Shiva, replicas of 12 Jyotirlingas, impressive replicas of the sacred Char Dham Hindu Temples of Jagannath, Badrinath, Dwaraka and Rameswaram, and an 18-feet statue of Kirateshwar - a hunter incarnation of Shiva.

Pemayangtse, meaning ‘perfect sublime lotus’,is believed to symbolize one of the four ‘plexus’ of the human body.Designed and founded by Lama Lhatsun Chempoway in 1647, it was originally built as a crypt, and later expanded. Today, it is one of the oldest and most famous monasteries of Sikkim.It’s home to the monks who are sworn to celibacy; given the title of ‘ta-tshang’ or ‘monks of pure lineage’.

As you enter, you are greeted by exquisitestatues of saints and more figures of importance. The first level houses stunning sculptures, paintings and ancient scrolls along with the notable statue of Padmasambhava’s eight incarnations,and the seven-layered wooden structure depicting the heavenly abode of Guru Rimpoche.

Cradled by emerald forests, on the banks of the River Rangit, Kirateshwar Mahadev Temple is a Hindu pilgrimage site of epic importance. Revered by Hindus, this ancient temple has a history dating back to several significant episodes in the Mahabharata.

Although the temple is dedicated to Lord Shiva, it also holdsshrinesdedicated to Goddess Durga and Lord Rama. The main festival of the temple, Bala Chaturdesi,happens in December each year, while Maha Shivaratri is celebrated with much fervour, during February or March. It’s a time when the whole town of Legship comes alive to celebrate with zest and joy.

Sikkim is not high on the tourist radar. But it should be. This tiny place has so much to offer visitors. From the tallest mountain range in the world to stunning glacial lakes, from kaleidoscopic flora to centuries-old Buddhist Monasteries, Sikkim has no dearth of wonders to mesmerize you.

There are many more stunning sites to visit across the gorgeous state of Sikkim, from ancient ruins to mesmerising nature treks; this list, however, covers the best of them. For packaged tours that conveniently cover travel, stay and all the best monuments, browse our Sikkim tour packages or call us at 1800 2099 100 for customised holiday packages today.