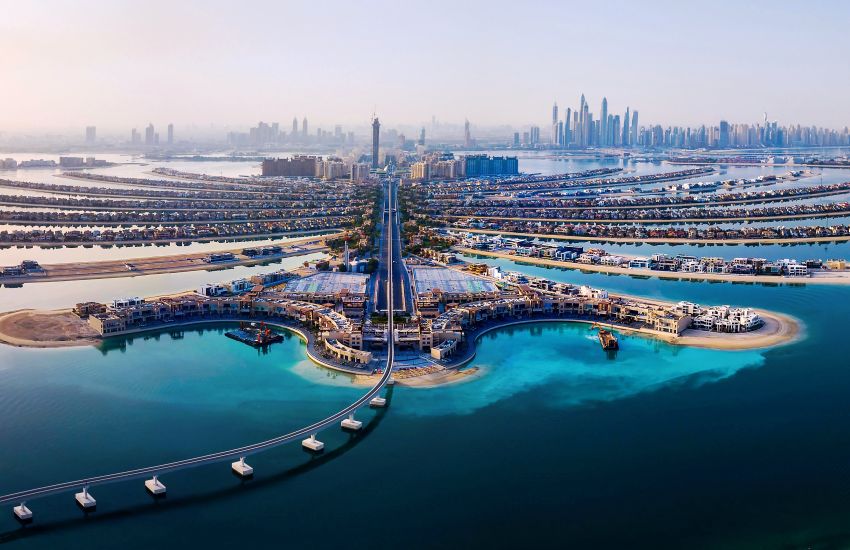 About the Palm Islands

Often referred to as the 'eighth wonder of the world', Dubai's Palm Islands are the largest man- made islands in the world and take their name from their artificially crafted palm tree shape. These offshore islands were created from reclaimed land and have since become a popular holiday destination, thanks to their uniqueness and Dubai's fast-growing tourist trade.

There are three islands in total that make up Dubai Palm Islands - Palm Jumeirah, Palm Jebel Ali and Palm Deira, however the only island open to visitors is Palm Jumeirah. Home to the popular tourist attraction and famous luxury hotel Burj Al Arab, Palm Jumeirah also features a residential property, some of which are home to the likes of celebrities including David Beckham. It also includes commercial attractions such as Crescent, The Trunk and 16 Fronds.

Dubai's Palm Islands are home to 5,000 waterfront apartments, 4,000 residential villas, 1,000 water homes and 60 luxury hotels, as well as a number of marinas, health spas, shopping malls, restaurants, cinemas, sports facilities and dive sites. However, despite their name and shape, there are no actual palm trees in sight on the Palm Islands. Another interesting fact worth noting is that as the world's largest man-made archipelago, they are visible from space.

Palm Islands were dreamed up by Sheik Mohammed bin Rashid al Maktoum to attract more interest to Dubai as its oil supply dwindled. The Sheik's vision has since been responsible for attracting tourists to the smaller coastline and desert climate of Dubai, a feat that had previously proved difficult. The Palm Islands were completed in only four years, with each island using over 53 million pounds of sand and 12 million pounds of rock to be created.

Palm Jumeirah is known all over the world as the synonym of beauty and elegance. From the air, this stunning island looks like a huge palm tree. Considered to be the UAE’s latest and greatest tourist attraction, Palm Jumeirah houses many of Dubai's premier destinations such as Atlantis, Lost Chambers Aquarium and Aquaventure Waterpark.

The main parts of Palm Jumeirah are referred to as the Crescent, the Spine, the Trunk and the Fronds. The entrance to Palm Jumeirah is through the huge trunk that forms a bridge between the island and the mainland.

Another bridge forms a connection between the Spine and the Trunk. The Crescent happens to be the breakwater, which is linked with the Spine through a tunnel. The long and beautiful Fronds form the most amazing part of this island destination and its actual beauty can be witnessed in an aerial tour over the island.

Deira Island is actually a group of artificial islands of Dubai. This project was initially supposed to be a part of Palm Islands and was then fondly known as ‘Palm Deira’. Deira island comprises four man-made islands that lie adjacent to the Deira District of Dubai.

The islands are intended to be residential spaces catering to glitterati and Emirati alike. Given the time and investment into the Deira Island project, it is certain that in a few years this Deira island will become one of Dubai's many crown jewels. Along with opulent hotels and resorts lining the 21 km coastline there is also going to be a waterfront night market and a huge amphitheatre, which can accommodate some 30,000 people and a shopping mall all catering to anyone fortunate enough to reside here. Many Bollywood celebrities and cricketers have second homes here making the neighbourhood an interesting place to live.

One of the three artificial islands in Dubai, Palm Jebel Ali was proposed to be the most significant of the three. Construction began in 2002 on Palm Jebel Ali and Jebel Ali was expected to house more than 250,000 people. This island is designed to accommodate six stunning marinas, a mega water park named 'Sea Village', and boardwalks with inscriptions of poems written by Sheikh Mohammed on it. As of now, Jebel Ali is still under construction and currently closed to visitors.

How To Reach The Dubai Palm Islands

Probably the easiest way to Palm Islands is a metro ride from the Dubai AirportTerminal 3 upto Nakheel station. Nakheel is the nearest station to Palm Islands, which are at a walkable distance. If travelling from Bur Dubai Metro station, the average journey lasts 33 minutes and costs the same.

Board the Line11 SkyBus from Airport Terminal 3 to reach the Ramada Chelsea Hotel in Palm Islands.

What is the purpose of the Palm Islands?

The purpose of the construction was to increase Dubai’s tourism by providing a one-of-a-kind tourist destination. The islands are brimming with contemporary world-class hotels, upscale services and amenities and miles of beaches, creating a world unique to anything anyone has ever seen before.

Among the three Palm Islands, there will be over 100 luxury hotels, exclusive residential beach side villas and apartments, marinas, water theme parks, restaurants, shopping malls, sports facilities and health spas.

How much does it cost to live on Palm Island Dubai?

If you are looking at a rental apartment in Palm Jumeirah, the prices start at AED 60,000 for a studio apartment. A 1-bedroom apartment will cost you anywhere from AED 70,000 to AED 195,000.

The Palm Islands also have a selection of apartments and villas for sale. As per current prices, the lowest price for an apartment in the Palm Islands is AED 639,000 while for villas basic prices start at AED 3.5 million, that's AED 35,00,000 or INR 6,96,04,630 excluding maintenance and other charges.

Is Palm Jumeirah open to public?

Yes. Palm Jumeirah is open to the public. In addition to many tourist attractions, Palm Jumeirah is also packed with a plethora of upmarket apartments, luxurious villas, lavish resorts, ritzy retails, and royal hotels, which are mainly positioned on the Crescent and Trunk. The place is also dotted with a number of elegant beach clubs and bars, which form the backbone of the bustling nightlife of the entire city. At present, this world-class artificial island is home to a vast population of over 10,000 people.