New Zealand Penguins: A Meet and Greet with Flippery Friends 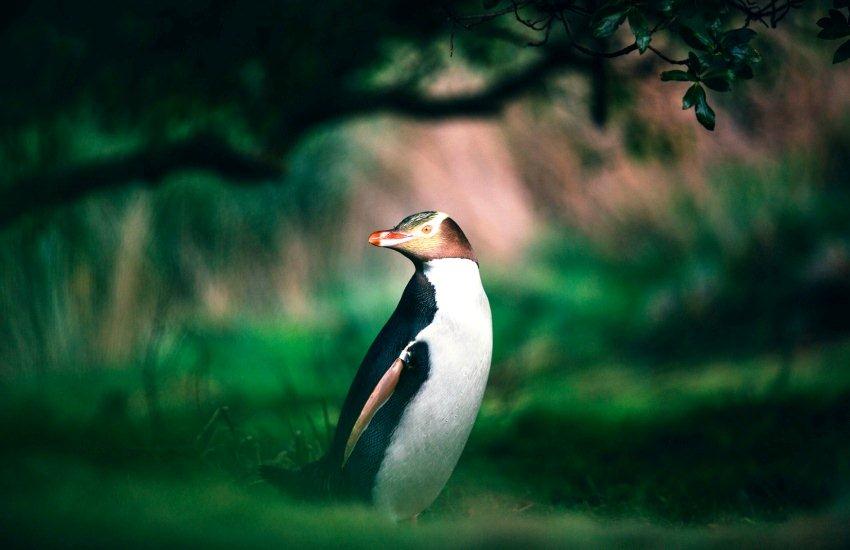 It’s practically impossible to look at a penguin and not feel an instant boost of joy. After all, these adorable creatures walk like they’re about to give you a great, big hug! Is there anything more endearing than that? We think not. How amazing would it be to meet these flippery-floppy things? New Zealand gives you a rare sneak peek into the universe of ‘Happy Feet’! So, get ready to fill your hearts with a whole lot of love because you have the chance to spot the three main penguin species native to New Zealand – little blue penguins, yellow-eyed penguins and Fiordland-crested penguins!

So, get ready for some extra fluff.

We’ve compiled a list of the best places to visit to observe penguins in their natural habitat.

For an up-close look at New Zealand’s darling white-flippered blue penguin, head to Banks Peninsula, just outside Christchurch. Nestled on the east coast of South Island, you will discover what is known to be the largest mainland colony of these pocket-sized creatures.  Gaze at this cuddly aquatic bird as it dawdles about, a precious sight, common only to the Canterbury region. Spread across 1,150 square km of volcanic land, the striking peninsula encompasses two large harbours and several smaller bays and coves. Tours leaving from Akaroa will enable intimate encounters with nature’s teensy ones, including observing them in their natural habitats and feeding them too. For the finest eco-tourism experience, travel to the long and hilly Otago Peninsula, located in the easternmost part of Dunedin. Hoiho or the endangered yellow-eyed penguin nests in the coastal vegetation, found in and around this plush region. Obscured from other species of birds and mammals, the tiny bird takes shelter. Dunedin is one of the few destinations in New Zealand to provide a rare glimpse into these adorable birds basking in the wild. You can catch sight of them on the beaches as well as on the sand dunes, ambling about their daily business. The best part is, the world’s tiniest penguin species, the little blue penguin, is also found here!

Picture this, a colony of yellow-eyed penguins and classic blue penguins systematically building nesting burrows on the vast golden coastline. This spectacular phenomenon occurs during the stroke of dusk in North Otago’s Oamaru town. Nicknamed ‘Penguin Town’, Oamaru is one of the prime spots in New Zealand to get your fill of these plump little beings. Savour the precious, priceless moments of watching a congregation of penguins marching home after a hard day’s work. Witness a sea of bobbling heads meander towards the shore after a day of fishing at the Blue Penguin colony. Isn’t that simply marvellous? The third largest island in New Zealand is arguably one of the most delightful places to spot a wide variety of aquatic birds. Lying just 30 kilometres south of South Island, across the Foveaux Strait, this slice of heaven is home to a rich biodiversity. Nature and wildlife photographers will especially enjoy exploring the Land of Glowing Skies, a term fondly used by the sacred Māori people. True to the nation’s penguin family, blue penguins and yellow-eyed penguins waddle among the rocks. Furthermore, one will find an abundance of the brown kiwi or Tokoeka. Interestingly enough, the island is home to more animals than human beings.

A sweeping network of sea-drowned valleys and sunken gorges makes up Malborough Sounds, a natural marvel at the northern end of the South Island. There is deep mythical significance to this spot, with legends of the submerged Māori watercraft lurking here. This is yet another place to peek at the regal blue penguins as they dally through their days.  We’d recommend taking a scenic boat cruise along stunning Tasman Bay. Make sure to keep your eyes peeled as you spy not only penguins, but seals and whales too.

Hiking to Monro Beach, through New Zealand’s hot-scented subtropical rainforest, is a mesmerising journey in itself. Add to that, the chance to observe the Fiordland-crested penguin and you’ve got yourself a brilliant day! This fascinating species is medium in size, yellow-crested and consists of a bluish-grey upper part and a white under part. One of the most unique races in the world, it is also one of the few that breed on beaches and is easily accessible. So, get ready for an extraordinary experience, amidst the cutest, aquatic bird that will remind you of the blockbuster Happy Feet.

The chance to watch nature take its course, slowly but surely, is perhaps one of the most beautiful sights in the world. You can have such an experience in Timaru, a port city in the southern Canterbury region of New Zealand. Caroline Bay is one such destination that specialises in all things, small and fluffy. Yes, little blue penguins bimble to the bay at dusk, nesting along the edges of the shore in roped-off areas. You can observe these gentle and agile creatures from behind the rope. The most special part is watching parents feed their chicks as well as endearing and aggressive nesting burrow interactions.

Now that you’re aware of the best places to spot penguins in and the etiquette to be followed, go forth and book your exciting New Zealand package !