Valley Of Flowers In Uttarakhand 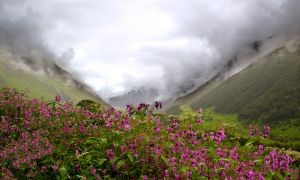 A World Heritage Site, Valley of Flowers National Park is situated in the Chamoli district of Uttarakhand. At a colossal expanse of 87 sq. km., it is a majestic valley endowed with endemic alpine flowers and fauna set amidst the transitional zone of the splendid zanskar ranges and the eastern and western Himalayas.

Until 1931, this blooming meadow’s presence was unknown to the world until three British mountaineers discovered it. Frank S. Smythe, Eric Shipton and R.L. Holdsworth had lost their way while returning from a successful excursion to Mt. Kamet and stumbled upon this exotic valley carpeted with blooming flowers. Spellbound by the beauty of the place, they dubbed it as the ‘Valley of Flowers’. Frank S. Smythe also authored a book on the valley with the same title.

Situated at an altitude of 3,658 meters above sea level, Valley of flowers is a vibrant colourful paradise with a myriad of flowers thriving in this pristine verdant meadow embraced by the resplendent snow crest mountains, sublime glaciers, mesmerizing waterfalls, sparkling streams and fluffy clouds above. An alluring landscape, it is a major attraction for nature enthusiasts, trekkers, botanists and photographers.

During the winter season the park gets obscured by the heavy blanket of snow and hence is shut during the time. On the advent of the monsoon season - July to September the entire valley blossoms with a riot of flowers in every colour imaginable and giving the park a magical appearance. More than 650 species of flowers are found here including, orchids, blue poppy, lilies, Geranium, marigold, Himalayan rose daisies, river anemone, primulas etc. A varied species of plants growing in the value are believed to have medicinal properties. The area is also residence to a diverse range of exotic and endangered fauna such as grey langur, brown bear, Himalayan weasel, Asiatic black deer, red fox, blue sheep, flying squirrel etc

The 17km trek to the Valley of Flowers starts from a hamlet, Govindghat. From Govindghat, the steep trek surrounded by captivating views of the waterfalls, lush forest and the Himalayas reaches Ghangharia which is around 14km from Govindghat. From here, a permit needs to be taken from the forest department to enter Valley of Flowers which is 3 kms away. The permit stays valid for 3 days and visitors are allowed only during daytime as no accommodation services is available inside the valley. One can also hire a porter, mule or helicopter to reach Ghangaria. The trek route is also common for the pilgrims to reach the Sikh temple at Hemkund.

Perched at an altitude of 4,329 meters above sea level in the Himalayan ranges, Sri Hemkund Sahib Gurudwara, literally meaning ‘lake of snow’ is a sacred temple in the Himalayas revered by the Sikhs. A tranquil, scenic holy place, it attracts thousands of pilgrims – Sikhs and Hindus from all over the world in spite of the harsh climate and steep trek to reach it. It is open only for a few months and remains closed during the winter season as it experiences heavy snowfall. The Hemkund Lake is a serene crystal clear lake reflecting the imposing mountains and enchanting glaciers making it a sight to behold.

The Valley of flowers is open from June to October and the best months to visit are between July to August when the flowers are in full bloom.

An experience of a lifetime to witness a valley decked with massive species of flowers in different hues and shades of colour.

How to get to Valley of Flowers

Flight: The nearest airport is Jolly Grant Airport, Dehradun. A cab can be hired from there directly to Valley of Flowers

Train: The closest station is Rishikesh station at a distance of 272 km. You can either hire a taxi or take a bus to the Valley of Flowers

Road: The closest bus stand is at Govindghat and from there the trek begins to the Valley of Flowers. You can also hire a porter, mule or helicopter.

Interesting Facts About Valley of Flowers