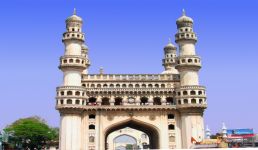 The Charminar is one of the most popular tourist attractions of Andhra Pradesh. The purpose of creating this monument was to ward off epidemic outbreaks in the city. The Charminar is a structure of four 48.7 metre high minarets made with granite. The four arches give the monument its name, with ‘char’ being the Hindi translation of ‘four’. The base of each minar is supported by a lotus leaf structure, which is a special and recurring motif observed in QtubShahi buildings. The first floor earlier housed a madarasa during the QutbShahi period, while the second floor has a mosque at the western side. To go to the top of the minarets, which offer resplendent views of the city, you require special permission from the Archaeological Survey of India.  The Charminar is open to tourists during all days of the week. Apart from this, it retains the better part of the culture and cuisine of Andhra Pradesh and has an already established tourism development as opposed to Telangana which has to start from scratch.

Golconda Fort is among the popular forts in India. The origin of its name is fromthe Telugu ‘GollaKonda,’ which means ‘Shepherd's Hill’. It was originally made of mud and its origins can be traced back to the Kakatia period. QutbShahi kings took over the fort and rebuilt it over a span of 62 years before it was taken over by Aurangzeb. This fort is famous for its factories, palaces, acoustics, and theintelligent water supply system,along with the famedFatehRahben gun. You can discover more about the fort by attending the sound and light show held there every evening.

The QutbShahi kings’ tombs are the most ancient historical monuments in Hyderabad.

Here, the entire dynasty of the QutbShahi kings has been buried. Located close to Golconda Fort, the tombs, built of grey Granite with stucco ornamentation, reflect a unique blend of Persian, Pathan and Hindu architectural styles.