Chasing the coast of the Bay of Bengal, is aesthetic, adventurous and abundant Andhra Pradesh. A state with varying shades, some known, and others to be discovered. Its beauty begins with its crystal lakes, moving slowly to its winding valleys, spearing right up to its prestigious peaks. Andhra Pradesh is synonymous with its dramatic cinema, spicy delicacies and diverse spiritual beliefs. Although it has remnants of ancient civilisations, it does not fall behind in the wheel of change. 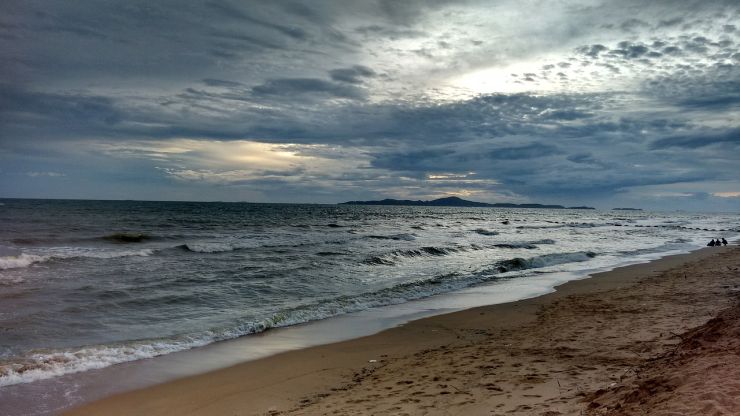 Visakhapatnam is home to goregous little beaches, along the coast of the Bay of Bengal. There, you can peek at a preserved submarine at a museum in Ramakrishna beach, or marvel at the palm trees of Yarada beach. One of the oldest beaches in Andhra Pradesh - Baruva beach, commemorates an ancient tragedy of a sinking ship. Kalingapatnam beach, on the other hand, is one the state’s major sand deposits and an old port from which textiles and perfumes were exported. Take a walk along one of these pristine beaches, for an evening of peace.

One of the largest freshwater lakes in India - Kolleru lake, is the nesting place for the majestic Siberian crane and painted stork. Pulicat lake is the second largest brackish water body in India, and attracts more than 15,000 flamingos every year, along with kingfishers, pelicans, herons, spoonbills and storks. A visit to any one of these lakes, is not only an opportunity to acknowledge these vast bodies of water, but to observe a variety of fascinating birds during their migratory routes.

Araku Valley in the Visakhapatnam district is obscured by emerald green forests, glittering waterfalls and rich coffee plantations. This beautiful hill station is clouded with an enchanting mist and holds the promise of indigenous local tribes. Here, you can visit the Anantagiri and Sunkarimetta Reserved Forest and gaze at the fascinating collection of biodiversity. Head to Horsley Hills in the Chittoor district of Andhra Pradesh. Perched up at a height of 1,265m, these hills are laden with eucalyptus plants and exotic species of trees.  If you’re lucky, you will spot the yellow-throated bulbul, black eagle or white-rumped shama. For a spiritual stop, visit Mahendragiri hill, in Mandasa village. It is the holy abode of Lord Shiva’s 6th incarnation – Parasurama.

St Peter’s Church in Bheemunipatnam, is an architectural gem. You must view the stained-glass window of the east side of the church. It illustrates Christ’s baptism, crucifixion and the breaking of bread with his disciples.

In the hill town of Tirumala, is a temple dedicated to the incarnation of Lord Vishnu – Sri Venkateswara, who appeared to save man from Kali Yuga. It is a classic example of Dravidian architecture, and the wealthiest temple in the world in terms of donations.

Shahi jamia masjid, in the Kurnool district, is believed to have been built by Governor Siddi Masood Khan. It is open to people of all faiths, who flock to behold the exquisite white monument that is spotted with green. Bavikonda Buddhist Complex is a mere 16km from Visakhapatnam. Here, you can view pottery, inscriptions, caskets, coins, tiles, bricks and even an urn with Buddha’s remains in it.

Andhra Pradesh is akin to a story book. With the turn of each page, is a new cultural element to behold. From the local dance form - Kuchipudi, to the unique textile art forms - Machilipatnam and Srikalahasti Kalamkari, to philosophical poems and expressionist Telugu literature, Andhra Pradesh will satisfy the culture connoisseur in you. And while your perusing through these elements, don’t forget to visit the cinema and catch a quintessential Telugu film. Your trip to Andhra Pradesh is incomplete without a taste of its spicy-tangy cuisine. Why don’t you try the sarva pindi, which a pancake made from rice flour, channa dal, green chillies, sesame seeds and curry leaves.

Location: On the world map

Andhra Pradesh shares its border with Telangana in the north west, Chhattisgarh and Odisha in the north east, Karnataka in the west, Tamil Nadu in the south and Bay of Bengal in the east. Rayalaseema and Coastal Andhra constitute the two major regions in this state.

Summers can go up to a searing 45 degrees, while the monsoon air is coated with humidity and makes for an uncomfortable trip.  As such, the winter season (November – February) is the most pleasant time to visit Andhra Pradesh as temperatures range from 15-25 degrees.

How to get to Andhra Pradesh – a journey to remember

By Road – Andhra Pradesh has a well-connected network of state and national highways, covering an area of 1000 km. Its bus service is highly efficient, including Pandit Nehru Bus Station, which is one of Asia’s largest bus terminals. You may choose to avail of the bus service or embark on a long road trip via a private vehicle or taxi.

By Rail – Andhra Pradesh’s intricate rail network is divided into 2 zones and subdivided into divisions. Its broad gauge covers an area of 3703.25 km. It is highly connected, both inter and intra state, rendering it a viable option to select.

By Air – Andhra Pradesh’s airports have access to domestic, international, and private flights. Rajiv Gandhi International Airport in Hyderabad has direct flights to and from Mumbai, Delhi, Bangalore, Chennai, Kolkata, Cochin, Goa and Ahmedabad. Visakhapatnam Airport and Vijayawada Airport constitute the other international airports in the state.

History: chronicles of the past

Archaeology points towards the rule of the ancient Mauryan dynasty in the Andhra region. However, the death of Emperor Ashoka led to the demise of this civilisation and the settlement of several smaller empires – The Satavahana dynasty, The Salankanayas, Kakatiyas, Musunuri Nayaks, Reddy Dynasty and Vijayanagara Empire. The 19th century saw the establishment of Coastal Andhra and Rayalaseema, as the British East India Company came to the frontier. The Nizam rulers relinquished power to the British but retained control over the local economy. It was in 1948 that the princely state of Hyderabad joined the Republic of India, through Operation Polo.

Andhra Pradesh is well known for its pilgrimage significance. But you can plan your Andhra Pradesh Holidays and book Andhra Pradesh Holiday Packages to enjoy the other delights that this southern state has to offer. When you Travel to Andhra Pradesh’s capital Hyderabad, the old world charm of the Nizams will enamor you. The cultural influence of the former Islamic rulers of the region can be found reflected on the era’s architecture, such as the famous Charminar, tombs and other lavish mosques.

Your Trip to this place will be unfulfilling without gormandizing on the exquisite culinary intricate to the state. This is the home to the famous Hyderabadi Biryani which is known for its refined taste to food connoisseurs. Andhra Pradesh being a fairly large state, its cuisine has many local flavors to it. But it is mostly ruled by spices, especially chili. Book your Andhra Pradesh Travel Packages to tantalize your palate now.

You will be a fan of Andhra Pradesh’s greenery once you visit its hilly terrains like the Horsley Hills and the Araku Valley. Horsley Hills will mesmerize you with its Mansarovar Lake, Gangotri Lake and the Environment Park, while the Araku Valley welcomes you with its natural archives like Borra Caves, Tyda Park, Chaparai Waterfalls and Bheemili Beach. One of the best things to do in Andhra Pradesh is to use these locations for an exotic photo shoot, especially if you want to capture the natural beauty of Andhra Pradesh tourism.

With a variety of alluring Andhra Pradesh tourism packages, Thomas Cook helps you create some beautiful memories at this wondrous state. We also offer you services like VISA application, flight bookings and hotel bookings to make things easier for you.