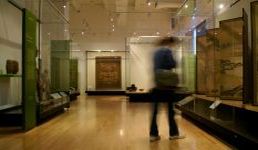 Opened for the public in the year 1952 on the Maldives’ National Day, the National Museum stands as an edifice of history. The people of the Maldives are known for their keen interest in preserving their art, culture, tradition and history and this museum is an example of their aspirations.

The Museum is located in Malé’s Sultan Park area and is part of the Maldivian Royal Palace compound, which by itself dates back to the 17th century. Designed and built by China, the National Museum was a gift from the Chinese government to the Maldives in the year 2010. The museum hosts of some intricate wall cravings of the Holy Qur’an and includes a collection of artifacts from the pre-Islamic era such as thrones, coins, shoes, armors, furniture, royal costumes and ornaments, turbans, ceremonial dresses, slippers and more belonging to the age.

The Museum is known for its head of the Lord Buddha made out of a coral stone, dating back to the 11th century. Besides, it also features a plank made of wood with engravings from HukuruMiskiiy, dating back to the 13th century. The three-storied museum was subjected to an incident of vandalism and several priceless pieces of artifacts were broken down to powders for being idols.

Known for: collection of artifacts from the pre-Islam era and a 11th-century Buddha head

How to reach: Reach Sultan Park bus station and walk towards the Maldives Philatelic Museum. You will find the National Museum adjacent to it. If you’re taking a ferry from your island, you will be dropped at mostly Jetty 1 or 2. Almost all the important jetties are located close to each other. Once you get down, its a two-minute walk to Sultan Park.

Operating hours: 10 AM to 5 PM from Sunday to Thursday