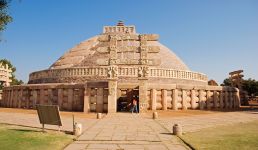 Perched on a hilltop of Sanchi Town in Madhya Pradesh, the glorious Sanchi Stupa is one of the oldest stone structures in India and poses great importance in the Indian history. Sanchi Stupa is a significant monument in the Indian Architecture and a specimen of the Buddhist architecture, it is also enlisted amongst the other famous monuments in the UNESCO World Heritage Sites since 1989.

How to get to Sanchi Stupa

The nearest Airport is the Raja Bhoj airport, Bhopal at approximately 55km away from Sanchi Stupa. From here, you can hire a taxi.

There are several buses plying from Bhopal bus stand, which is about a kilometre from the Bhopal Junction railway station to Sanchi and it takes approximately an hour.

Sanchi Stupa was commissioned by King Ashoka in the 2nd century BCE. Its center is a huge hemispherical brick dome with an elevated terrace and a balustrade built over the relics of Lord Buddha. It is crowned by the chhatri, an umbrella like structure which symbolises high rank and also was intended to honour and shelter the relics. In the 1st century BCE during the reign of the Satavahanas, four intricately carved gateways and a banister encircling the entire structure of Stupa were added. The Sanchi Stupa built during the Mauryan period was made of bricks. The complex flourished until the 11th century. The construction of the stupa was commissioned in several locations across India in order to spread Buddhism.

During the rule of the Shunga Emperor, the stupa was further expanded with stone slabs to practically double its original size. The dome was flattened and covered by stone slabs. Three superimposed chatras were built to crown the dome. It symbolised the Wheel of Law or ‘dharma’. A high rounded drum that can be reached through a double staircase became the seat of the dome enabling one to circumambulate the sacred dome.

The gateways and balustrades come alive with inscriptions and illustrations narrating the life of Lord Buddha and tales from Aryasura’s Jatakamala. The spectrum of carvings are a symbolic manifestation of the Buddha that have been used in the form of trees and inanimate objects like thrones, wheels or footprints.

The Sanchi Stupa is also the site of the Ashoka Pillar. The polished sandstone pillar stands at the main gateway and is reminiscent of the Greco-Buddhist Architecture. Presently, only bottom half of the erection stands at the site. The upper half is displayed at the Sanchi Archaeological Museum which is close by.

The Sanchi Stupa complex comprises of various other prominent monuments such as:

One of the free standing temples of India, it dates back to the 3rd century BCE and consists of vestiges from three different historic periods, the earliest dating to the Maurya Dynasty with inscriptions suggesting that it was built by King Ashoka’s father Emperor Bindusara.

The Stupa commissioned during the Shunga reign came to be known as the second and third stupas. The magnificently detailed and ornated stupa is monikered as "the oldest extensive stupa decoration in existence" and is in alignment with the theme of stone casing and balustrade. The detailing represents the Buddhist theme and highlights the 4 events that defined the life of Lord Buddha - Nativity, the Enlightenment, the First Sermon and the Decease. The stupa also depicts the Jataka Tales and is considered as the birthplace of the same.

Replete with a staircase and balustrade, this stupa was built slightly after stupa no. 2 and the relics excavated from here confirms this. It comprises of the relics of Sariputra and Mahamoggallana, the disciples of Lord Buddha.

A gem of the Buddhist art and architecture, the Sanchi Stupa attracts millions of visitors annually and is considered the best conserved ancient stupas .

• The major attraction are the four giant gateways and the large hemispherical dome.

• Immerse in the history of Buddhism along with the Mauryan, Satvanas and the Shagunas empires.

• Marvel at the splendid intricate carvings on the four gateways that depict the life cycle of Lord Buddha.

• The famous Ashoka Pillar that has an Ashokan inscription (Schism Edict) and an inscription in the ornamental Sankha Lipi from the Gupta period.

• The Sanchi Stupa Complex comprises of several other significant monuments that are equally marvelous and significant to the history.

Witness the iconic landmark structure from the Maurya Dynasty and the Ashoka Pillar that defined the emblem of India.

• The Great Stupa of Sanchi underwent a complete reconstruction after malevolent damage was inflicted upon it in the middle of the 2nd BCE. The reconstruction entailed of a stone casing, a terrace with a double flight of steps, balustrades, a paved processional path, and an umbrella and railing.

• In the 20th century, the monument underwent extensive restoration to their present condition under the supervision of Sir John Marshall after it was found in a shamble state by General Henry Taylor who was a British officer.

• Sanchi was the birthplace of Emperor Ashoka’s wife Devi.

• Eight stupas have been erected, each comprising the relics of Lord Buddha.

• Most of the Buddha statues and carvings still possess the legendary Mauryan polish that made it gleam like glass.

• The last addition made to the stupa was done during the reign of the Gupta dynasty prior to 450 AD.

• The three ‘parasols,’ set one above the other along the shaft, are located in the uppermost region of Sanchi Stupa. They represent a heavenly hierarchy.