Places to Visit in Wayanad 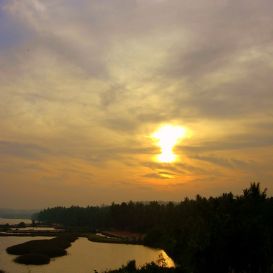 Nestles amidst the Western Ghats on the borders of Tamil Nadu and Karnataka, Wayanad is a dreamland of pristine verdant valleys, dense forests and lush green landscapes in God's own country, Kerala. Wayanad is derived from Vayal Nadu which means the land of ‘paddy fields’ and is popular for its sprawling tea plantation, coffee estates and spice plantation such as pepper and cardamom. Wayanad is every nature lover’s paradise with its unadulterated enchanting landscape steeped in rich culture and history and abundant flora and fauna. Adventure seekers can look forward to trekking on the mountain peaks raising like giants and rappelling in the waterfalls. Other attractions are:

Situated amidst the Western Ghats on the foothills of Banasura, Banasura Dam is the largest earthen dam in the country and the second-largest in Asia. Built along the river of Karamanathodu, a tributary of the Kabini river, the view from the dam is spectacular and stretches for miles. The artificial lake formed within Wayanad’s Banasura Dam offers speed-boating, kayaking, and coracle rides. The dam is dotted with a cluster of islets which were formed when the reservoir submerged the surrounding areas during monsoon. A trek to the Banasura Hills is a beautiful breathtaking excursion while the sight from the top offers a mesmerizing view of mountain ranges, verdant tropical forest, grand waterfalls and rivulets and diverse flora and fauna.

Pookot Lake is a natural freshwater lake surrounded with captivating evergreen forest and rolling slopes that exude an air of tranquillity. The lake is shaped as the map of India and the path leading to the lake is lined with lush green vegetation casting a beautiful magical quality and the presence of an abundance of blue lotus flowers giving it a surreal appearance. The lake has plenty of fresh water fishes and a species of cyprinid fish known as Pethia pookodensis is known to occur only in Pookot Lake. The lake also offers boating facilities and children's park along with the presence of fauna in the neighbouring forests. These qualities make Pookot Lake one of the most sought after tourist destination in Wayanad and a must visit for nature enthusiasts.

Situated at an elevation of 2,100 meters above sea level and located near the town Meppadi 8km from Kalpetta, Chembra is the highest peak in Wayanad and third highest peak in South India. The climb up the Chembra Peak is an elating experience and famous with trekkers, as the higher you go, the view starts getting more attractive with the spectacular sights of luxuriant greenery, entire Wayanad district, glimpses of Kozhikode, Malappuram and Niligiri districts, the Banasura Dam and the famous heart-shaped lake that as per belief has never dried up. The 4km trek to the peak is a bit challenging and starts from a 7km jeep ride from Meppadi to the watchtower at the foothill of Chembra Peak. From here the trek takes about 3 hours each way. The best time to trek the Chembra Peak is from November to February and monsoon season is best avoided as the route gets slippery.

Established in 1973, The Wayanad Sanctuary and Elephant reserve with an area of 345 sq. km is the second largest in Kerala and an integral part of the Nilgiri bioreserve. It is segregated into two parts namely Upper Wayanad and Lower Wayanad and harbours rare and endangered species. The sanctuary is home to tigers, elephants, sambar, jungle cats, mongoose, panthers, bisons, monkeys, wild dogs, deers, crocodiles, spotted bears, langurs, gaurs, civet cat, cheetah, bonnet macaques, wild bears and a diverse species of snakes such as viper, coral snake etc. and reptiles like lizards, chameleons etc. There are 216 bird species in the sanctuary such as owls, peacock, woodpeckers, babblers, jungle fowls, cuckoos, etc. The sanctuary is covered with moist and deciduous forests and evergreen tree pastures. Bamboo groves, teak, silver oak, rosewood comprise the forest. The sanctuary can be toured only in a jeep safari and it takes about an hour.

Situated at a height of 4,000 feet above sea level, the historically significant Edakkal caves attracts tourists and archaeologists. It is popular for its exquisite rock and wall carvings and was formed by a heavy boulder straddling a fissure in the rock. Divided into two chambers, the stone walls have several pictorial paintings of human, animal figures and objects used by humans belonging to the Neolithic and Mesolithic age dating back to 6000 BC and also have some links with Indus Valley Civilization. To reach the caves, it is an uphill trek of 1.5 hours and is lined with a beautiful view of coffee plantations.

Also known as Sentinel Rock Waterfalls and located in Vellarimala, it is a riveting three-tiered waterfall cascading from a height of 656 feet and forming a pool at the base that is ideal for swimming and relaxing around. The cliff face of the fall offers an adrenaline pumping exciting opportunity of abseiling surrounded by a picturesque view of the evergreen forest. The drive to the fall is equally beautiful and exciting as you traverse through a maze of tea estates and spice plantations. The best time to visit is during summers as during monsoons the water level rises, making it dangerous to swim or rappel.

The best time to visit Wayanad is between October to May when the climate is pleasant and revitalizing.

2. Meenmutty is a majestically grand three-tiered waterfall cascading from 300 meters. The highest waterfall in Wayanad, it can be reached by embarking on a 2 km hike through the forest on the Wayanad-Ooty road.

3. A trekkers delight and nature lover’s, Neelilama viewpoint offers many trekking routes and a splendid view of the lush green valleys and the Meenmutty falls.

4. Kuruva Island is a major attraction for tourists from all over the world. Situated in River Kabini, it is a charming and serene island with dense forest rich in flora and fauna and surrounded by fresh water offering visitors an opportunity to pander in bamboo rafting.

1. The region was known as Mayakshetra in the earlier days before finally evolving to Wayanad.

2. Wayanad has a rich history and the edicts and caves of Ambukuthimala and other several evidences prove that the place was inhabited during the New Age Civilization.

3. Edakkal literally means ‘a stone in between’ and the Edakkal caves is the only known place in India with Stone Age carvings.

4. The Banasura hills where the Banasura Sagar Dam is situated is named after 'Banasura', son of the famous ruler, King Mahabali who undertook severe penance on the top of the hills. Banasura hill is the third largest peak in the Western Ghats.

5. Wayanad is one of the popular honeymoon destinations in India

An opportunity to unwind in a green paradise surrounded by idyllic nature and mesmerizing waterfalls.

How to get to Wayanad

Flight: The nearest airport is Calicut International airport, Kozhikode located at a distance of 90 km. A cab or bus can be taken from there directly to Wayanad.

Train: The closest station is Kozhikode railway station at a distance of 110km. A cab or bus can be taken from there directly to Wayanad.

Road: It is well connected to major cities and several private and state buses run to Wayanad. Private car and taxi can also be hired.