The Phantom of the Opera Theatre 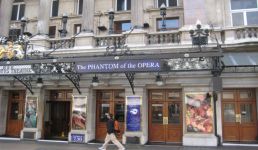 One of the most well-known magnum opus, The Phantom of Opera has been successfully playing since 1986 and now in its 33rd glorious year, it continues to mesmerise and entrance audiences at Her Majesty's Theatre, London and around the world.

One of the longest running West End shows, the famous spellbinding musical is composed by the legendary Andre Lloyd Weber and has been adapted from a French novel of the same name by Gaston Leroux. A 1986 Olivier award and the 1988 Tony award winner, it is an enthralling haunting tale of unrequited love that evokes a bouquet of emotions. Set against a backdrop of lavish set, magnificent costumes and enchanting musical score, The Phantom of Opera makes for a fabulous entertaining show.

The Phantom of Opera revolves around a disfigured musical genius and magician who lives under the Paris Opera House. In the middle of rehearsals, as the prima donna Carlotta is singing, a backdrop inexplicably falls down nearly killing her. Post this she refuses to perform and the directors find an immensely talented choir singer Christine to replace her. Christine has been taking her musical lessons from a mysterious figure whom she only knows as ‘Angel of Music’. It is in fact the Phantom himself who is taken by her beauty and wishes to catapult her to stardom.

Christine’s first show is attended by Raoul who recognizes her as his childhood friend and post the show wishes to take her out for dinner. Hearing this, the Phantom gets jealous and Christine asks him to reveal himself. The Phantom obliges by appearing as a ghostly, partially masked face in her mirror and takes her to his lair where she sees an image of herself in a wedding gown. Overwhelmed, she faints and is awaken by Phantom’s soulful music. Unable to resist herself, she goes up to Phantom and lifts his mask to reveal his grotesque face. Scared, she recoils and Phantom expresses his wish to be loved by her. Moved by pity, Christine returns the Phantom's mask to him and the Phantom takes her back above ground.

The Phantom sends notes to Raoul that he should make no attempt to see Christine again, to Carlotta saying her "days at the Opéra are numbered." and to Ms. Grie demanding that Christine replace Carlotta as the Countess in the new opera, Il Muto and that Box 5 be empty for him in the theatre. The managers are warned they will face a "disaster beyond imagination" if these instructions aren't met. Not paying heed to the warnings, they enrage Phantom who kills a staff member and makes Carlotta lose her voice. In the ensuing chaos, Christine escapes with Raoul and divulges to him about the Phantom. Raoul promises to love and protect her which is overheard by Phantom and leaves him heartbroken.

Six months later, in the midst of a masquerade ball, the Phantom makes an appearance and announces that he has written an opera entitled ‘Don Juan Triumphant’ and demands that it be produced immediately with Christine (who is now secretly engaged to Raoul) in the lead role, and he warns of dire consequences if his demands are not met. Noticing an engagement ring on a chain around Christine's neck, the Phantom angrily pulls it from her and vanishes in a blinding flash of light.

Raoul finds them and attempts to persuade the Phantom to spare Christine. He captures Raoul and tells Christine that he will free Raoul if she agrees to stay with him forever, and if she refuses, Raoul will die. As the Phantom and Raoul both plead to her, Christine mournfully wonders what kind of life the Phantom has lived. She tells the Phantom that he is not alone and kisses him, showing him compassion for the first time in his life.

The Phantom, having experienced kindness at last, understands that he cannot compel Christine to love him and sets them both free. Raoul hurries Christine out of the lair, but she returns alone to give the Phantom back his ring.

Interesting Facts About the Phantom of Opera Show

How to get to the Her Majesty's Theatre