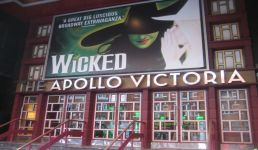 An award-winning adaptation of the prequel of Wizard of Oz, the enchanting magical musical which premiered in 2006 has been running successfully for 12 outstanding years. One of the longest running shows, it has performed in more than 100 cities in 13 countries around the world and has thus far been translated into five languages: Japanese, German, Dutch, Spanish and Korean, and seen by more than 55 million people. It joins the ranks as the 15th longest running show in West End history and has garnered around 90 international awards.

The spectacular musical is based on the novel ‘Wicked: The Life and Times of the Wicked Witch of the West’ by Gregory Maguire and adapted for the stage by Winnie Holzman. The music and lyrics is composed by Tony Award-winner Wayne Cilento and the production is directed by two-time Tony Award-winner Joe Mantello. The spectacle recites an incredible untold story of an unlikely but profound friendship between two young women who first meet as sorcery students which leads to a powerful tale of love, acceptance and friendship that will resonate and delight the audience.

In the Land of Oz, the Ozians are rejoicing over the demise of Elphaba, the Wicked Witch of the West. Glinda the Good Witch talks about Elphaba’s past when an Ozian asks her if Elphaba and she were friends. She reluctantly admits that they were, leading Glinda to tell them the story of how they became best friends. Elphaba, a rogue child, being born with green skin color, as her mother had used the green elixir and her sister Nessarose in a wheelchair reach the Shiz University where the beautiful and popular Glinda also studies. The headmistress, Madame Morrible, decides to take Nessarose under her protection, leaving Elphaba and Galinda as roommates, much to their chagrin. Elphaba attempts to take back her sister, and her anger manifests physically in an explosion. Madame Morrible recognizes that Elphaba has special powers and decides to teach her sorcery. She tells Elphaba her powers might allow her to one day work with the Wonderful Wizard of Oz, something Elphaba has dreamed of her whole life. All of this attention does little to endear Elphaba to Galinda, and the feeling is mutual and they fight constantly.

An Arjiki prince, Fiyero arrives at Shiz and they all decide to have an orientation party at the Ozdust Ball that evening. Glinda gives an ugly hat to Elphaba to wear at the party and Elphaba takes it as an act of kindness. Elphaba arrives wearing the witch's hat only to find the other students laughing and staring while she awkwardly dances alone. Glinda feels regretful and goes to dance with Elphaba and they start to bond.

Elphaba begins to fall for Fiyero, when Madame Morrible comes to tell her that the Wizard has decided to meet her. Nessarose, Glinda and Fiyero come to see her off. Elphaba invites Glinda to the Emerald City with her and the girls meet the Wizard of Oz. He promises Elphaba that he will grant her request if she proves herself. Madame Morrible gives her an ancient book of spells, called the Grimmerie, which only the magically gifted can read. Elphaba is asked to try a levitation spell on the Wizard's monkey servant, Chistery. However, the spell does not go the way Elphaba plans when Chistery sprouts wings and she realizes the Wizard has no powers and he is merely a fraud. He offers Glinda and her everything they have ever wanted if they will help him, but Elphaba is unwilling to comply. She runs away, and to prevent the truth from getting out, Madame Morrible spreads rumours that Elphaba is a "wicked witch". She performs a spell on a broom and flies away from the Emerald City, never to return.

Elphaba's opposition of the Wizard's regime has earned her the title "the Wicked Witch of the West” and Glinda “the Good". Fiyero becomes the Captain of the Guard. Elphaba returns to the Wizard's palace to free the monkey servants coming across the Wizard himself. He tries once again to convince her to work with him, and offers to redeem her reputation. Angered, she accuses the Wizard but he calls the guards to arrest Elphaba for fraud. Fiyero instead helps Elphaba escape and decides to leave with her. Broken hearted, Glinda suggests to the Wizard and Madame Morrible that to apprehend Elphaba, the can use her sister as a bait.

Elphaba and Fiyero fall in love and promise to be together always. Glinda and Elphaba meet again at the site where Nessarose has been crushed by a house with a girl named Dorothy Gale inside. Fueled by the rivalry over Fiyero, the two have a heated argument. Later, all of Oz's citizens unite, declaring war on Elphaba. Glinda feeling guilty, flees to warn Elphaba, as the angry mob sets out to take Kiamo Ko by force. Back at Kiamo Ko, Elphaba has already captured Dorothy. Glinda travels to Elphaba's castle to warn her of the danger and persuade her to let Dorothy go. Elphaba refuses until she receives a letter saying that Fiyero has died. The two women forgive each other and Elphaba gives the Grimmerie to Glinda. The two friends embrace for the last time before saying goodbye. Dorothy throws a bucket of water on Elphaba, who appears to disintegrate leaving behind her black hat and the small bottle of green elixir.

In the Emerald City, Glinda confronts the Wizard with Elphaba's bottle, which he recognizes as identical to his own. He was Elphaba's biological father and the cause of her green skin. Meanwhile, back at the castle, Fiyero (now a scarecrow) comes to the spot where Elphaba was melted. Making sure that no one is watching, he knocks on the floor and out from a trap door steps Elphaba, very much alive; the entire thing was a ruse to convince her enemies of her death and to ensure her future with Fiyero, who was transformed into the scarecrow by her spell unintentionally. Before leaving, Elphaba regrets that she will never see Glinda again and tell her that they are alive. As the people celebrate and Glinda mourns, Elphaba and Fiyero leave Oz together forever.

Interesting Facts About Wicked – The Musical

How to get to the Apollo Victoria Theatre