A tea leaf that brews an amber liquid, a palace that was cemented with rice flour and duck eggs, a pasture that preserves a rare golden langur, Assam is a chest full of surprises. An alchemy of cultures, and a confluence of colour. Shades of green - emerald, sea foam and sage - coat the plains, while caramel mountains frame the backdrop. The one horned rhinoceros coexists with the elusive tiger, and artistic traditions blend with modern education. Deemed as the gateway to northern India, Assam is every traveller’s aspiration.

Highlights of Assam: A traveller’s footsteps From 4am to 6 am farmers handpick a special tea clone, at Manohari Tea Estate. The leaf is then hand rolled and processed, to make a beautiful golden brew, that is unlike any other tea in the world. It takes up to 40 days to create this beautiful blend, but only a minute to sip this aromatic liquid. It is India’s most expensive tea, and a culmination of skill and care. Harmutty Tea Estate is one of Assam’s oldest plantations, dating back to 1870. The green hills of Arunachal Pradesh hug this garden, as the Dikrong river flows nearby. The estate provides the perfect recluse for an evening of relaxation and high-quality brewed tea. And if you want to gain insight into the magical universe of teas, you must visit Tocklai Tea Research Institution. Visit world heritage Kaziranga National Park, to get a magnifying view of the powerful one-horned rhino and royal tiger. The park hosts 2/3rd’s of the world’s rhino population, and the highest density of tigers. Did you know that Kaziranga has inspired many books, documentaries and songs? It is not only a haven for large mammals but is renowned for its species of birds too. Kohara range and Bagori range, make for the best wildlife spotting points. Manas National Park is so much more than just a tiger reserve. This UNESCO heritage site boasts a collection of rare species such as the golden langur, roofed turtle, pygmy hog, and hispid hare.

Kamakhya temple commemorates female spirituality and the power of procreation. Situated in the Nilachal hills of Guwahati, this auspicious site is where Shiva scattered the yoni (womb) of his beloved wife. This marks one of the oldest Shakti Peeths. Da Parbatia temple, in Tezpur, is a fine example of iconoclastic art. The ruins of the temple door are adorned with carvings of Goddess Yamuna, and Ganga. Haragriva Madhava temple, in Hajo, is a 16th century Buddhist shrine that worships the man-lion incarnation of Lord Vishnu.

Talatal Ghar Palace, in northern Assam, represents Tai Ahom architecture at its best. A 7-story structure, that was home to royalty, including Raja Swargdeo Rudra Singha. It was built using bricks and organic cement, a concoction made of rice powder and duck eggs. Despite the unconventional use of raw material, the palace has stood the test of time. Kareng Ghar, in Garhgaon, is another example of skilful craftsmanship in Ahom architecture. Made of wood and stone, the upper storeys housed the royal family, while the lower storey served as the servant’s quarters, store room and stables.

Assam State Museum, in Guwahati, has an impressive collection of artefacts of natural history, anthropology, epigraphy, sculptures, folk art, and arms collections. Like all museums, this one holds objects of great historical and cultural significance. You must check out the reconstructed tribal homes to get a feel of quintessential Assamese living. 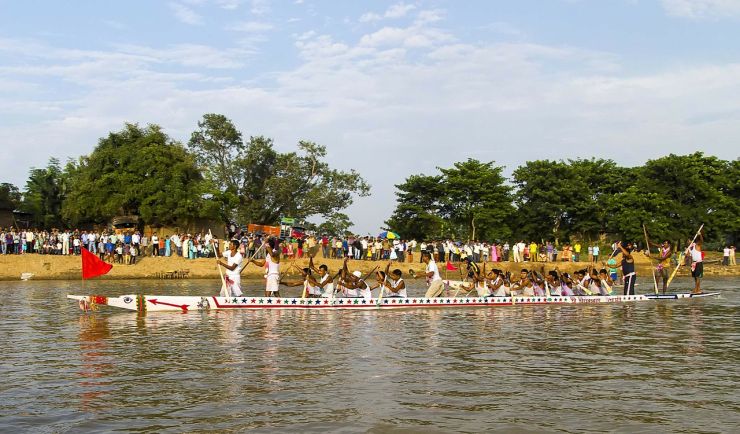 Assamese culture is a delightful fusion of Austric, Dravidian, Tibeto-Burman and Thai influences. Each trinket in its box, represents a unique ingredient. From the age-old traditions of symbolism and bamboo craft, to the expressive dance forms, sweet music and poignant literature, Assam sways with the cultural winds. The state offers some of the most sumptuous Assamese cuisine. From pork with sesame seeds, to fish curry flavoured with fermented bamboo shoots, you will find mouth-watering dishes galore. Try Luchi, a fried flat bread, that is typically doused in a vegetarian curry.

Interesting facts about Assam: A little treat for your mind

Netsled in the Himalayan mountains, alongside the Brahmaputra and Barak River valleys, is the state of Assam. Assam shares its border with Bhutan and Arunachal Pradesh in the north, Nagaland and Manipur in the east, Meghalaya, Tripura, Mizoram and Bangladesh in the south, and West Bengal in the west.

Assam experiences the ‘tropical monsoon rainforest climate’. As such, the state encounters heavy rainfall and is embraced in layers of humidity. The summers and winters, however, are both pleasant seasons to visit Assam. Summers go up to a maximum of 38 degrees, while winters fall to a minimum of 6 degrees. November to March would be the ideal time to plan a trip, because it is neither too cold nor too warm.

How to get to Assam: En route, a cultural paradise

By Road – You may choose to travel by road, via a bus, taxi, or private vehicle. The highways make for a smooth journey, while the stunning landscapes makes for a visual feast.

By Rail – Assam is well connected to other parts of the country, via its rail service. There are direct trains to and from Kolkata, New Delhi, Mumbai, Chennai, Bangalore, Cochin and Trivandrum.

By Air – Assam is accessible via flight, through national and private airlines. It has direct flights to and from major cities such as New Delhi, Mumbai and Bangalore. Lokapriya Gopinath Bordoloi International Airport is a mere 25 km from the city of Guwahati.

The 1800’s witnessed a change, as the British seized control, post the first Anglo-Burmese war. In 1874, Assam was separated from British-ruled Bengal, to form the non-regulation province, or Assam Chief-commissionership. This was followed by an incorporation into the Eastern Bengal and Assam province, in 1905. Finally, in 1912, Assam was established as Assam Province.

It was in 1947, however, that Assam became a constituent state in India.

Time moves forward for every state, and every country. As the stories of past conquests, heroism and victories fill your mind, take a look at what Assam holds for you today.

The fertile land of exotic views, Assam remains a paradise unexplored. The mighty Brahmaputra River coerces its way through the land, creating dramatic gorges and stiff cliffs. If you Travel to this place, you will be overpowered by its mesmerizing scenery that seems straight out of picture postcards, with the autumnal vistas and stretches of gold-green rice fields.

Your senses will go riot with the stunning landscape greeting your eyes. Assam is doing its bit to draw more international tourists to this piece of paradise. On a Trip to this destination, experience the famous Assam tea estates and savor the flavorsome teas. They are integral to Assam Vacation packages.

The local Assamese people help make Assam Tours even more interesting. The local cuisine too is extremely delicious and the flavors stay with you for long. Make sure to include National Park trips in your Assam Tour itinerary. However, most Assam Holiday Packages don’t permit it until November. Therefore, schedule your trip in accordance and book the appropriate Assam Travel Packages. Go on Assam Holidays and you will come back satisfied.

Assam is one of the most beautiful states in North-East India. This place is now turning into a major tourist attraction for its splendid natural beauty and zestful culture. Spread along the Brahmaputra valley, this state is known for its delectable dishes, great hospitality and an artistic heritage waiting for its guests.

Assam tourism is happy to take the visitors on an elaborate tour of the state. But before that, it is important for you to know the best time to visit Assam. As suggested by Assam Tourism, you will not be able to enjoy the beauty of the state during monsoon season, from July to September, because of the torrential downpour and flooded Brahmaputra River. So, if you are booking Assam tour packages, it is better for you to go for months between November and May. The months that see maximum crowd are from March to May, as they are months of blooming Orchids as well as famous and colourful Bihu festival.

Assam is most visited by tourists who love to walk along the natural vegetation and fabulous heritage. The very best of the things to do in Assam for every nature lover is to walk through charming orchid gardens and lush green tea plantations of Assam.

However, your tour to Assam will not end with just exploring the widespread greenery. An avid traveller would pick up an Assam tourism package that would never miss on its impressive heritage sites. Some of the best places to visit in Assam would be Guwahati for its hilltop Kamakhya temple and Silk Bazar, Umananda Temple on Peacock Island in the Brahmaputra River and the ancient pilgrimage site of Hajo and Madan Kamdev, known for its temple ruins.